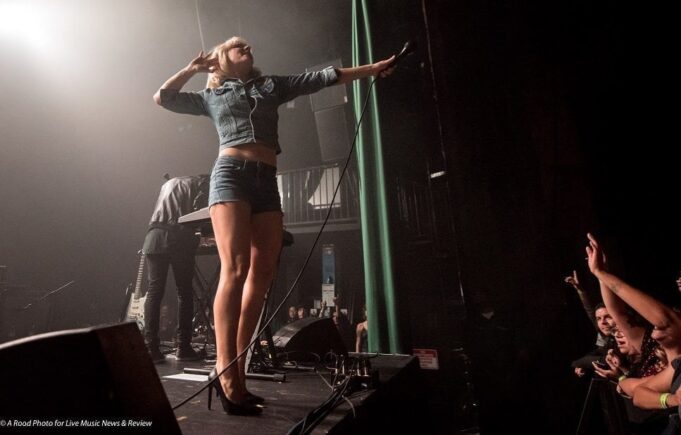 The Sounds Fonda Theatre, Los Angeles, CA November 12 2017 Photos by Stevo Rood Review by Bob Saldana Drop us an email to submit a story or to just shmooze at [email protected]

Formed in 1998, they have taken their music all over the world. The pop sound sensibilities of countrymates Abba is not lost on their passionate danceable melodies. In fact, this indie band delivers pounding dance music with a vengeance.
The fans pumped their fists and sang along inspiring Maja to come down from the stage during a number and dance with the audience. With all the kissing and hugging that was going on, it is obvious that this band is for lovers! This tour seemed to use the same strategy the previous 2016 tour did, which was give the audience the songs they wanted. And they did! Bravo….
Check out the full gallery of photos by the amazing Stevo Rood Photography here.
Set List:
Intro
Painted by Numbers
Stay Free
Fire
Tony the Beat
Much Too Long
Mine for Life
Shake Shake shake
No One Sleeps When I’m Awake
Thrill
The Darkness
Something to Die For
Best of Me
4 Songs and a Fight
Living in America
Outlaw
Rock n Roll
Dance with Me
Turn to Gold
Hope You’re Happy Now

From the video channel of The SweMusicMan

Check out the full gallery of photos by the amazing Stevo Rood Photography here.