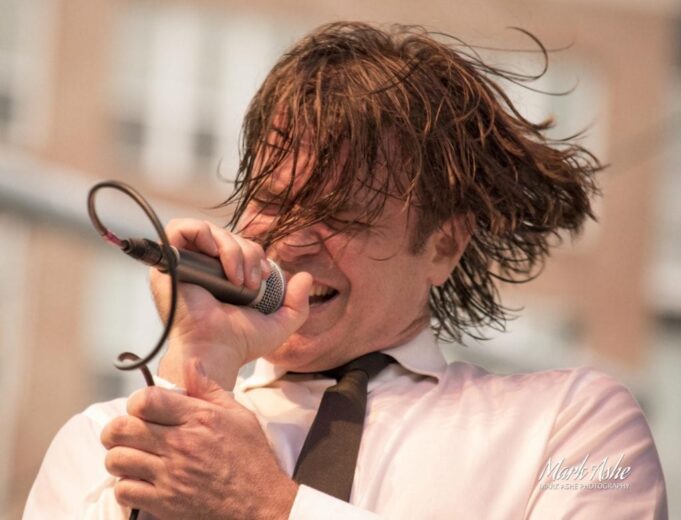 McGrath himself was sufficiently impressed by his opening act to announce to the crowd at the beginning of his set, “The Lord Calverts are awesome-it’s like the Hives meet the ’60s.” On this extremely hot summer evening (the temperature was in the 90s), the Calverts, wearing their usual outfits of black suits and ties, were completely soaked by the end of the third song, but this didn’t stop them from giving a rip-roaring, no- holds-barred show.

They were on fire right from the jump, playing six songs from their debut album, The Lord Calverts…NOW, starting with “(Gonna) Gonna Tear It Up,” then going straight into the grungy “I Need a Little Kiss,” which feature blistering guitar work from Buk. With Lydon’s full-throated, high-energy singing, the dueling guitar interplay of Buk and Becker, and Harvey and Capitelli providing the powerful groove of the rhythm section,  The Calverts play classic ’60s garage/pop with an authority that’s fully contemporary musically and lyrically- they are a force to be reckoned with. As the set progressed, the LC’s played a few unreleased songs that are every bit as good as songs from their current album, including the moody “Evanston,” the modern potboiler “Blood From A Stone,” “My Baby,” a bluesy hip-twister, and the torch song “Worried Mind,” which featured Lydon’s remarkable vocal range. They ended their powerful set with back-to-back blockbusters “I Can’t Afford You” and “Is it Love?” The Lord Calverts regularly perform around the New York City area. If you have a chance to see this band, don’t walk, run-they’re that good!

Check out the full gallery of photos by Mark Ashe.

The [email protected] Outdoor Concert Series is an incredible marketing tool for the city of Stamford, and for $15 you get top-notch live music. There were approximately 5,000 people at this concert, and though they came out to see Sugar Ray, the crowd really responded to this natty NY quintet and found a new act to love in The Lord Calverts. Set List: (Gonna) Gonna Tear It Up I Need a Little Kiss Fit to Be Tied Professor of Love Crystal Ball You Can’t Find Love Evanston Blood From A Stone Ain’t Never My Baby Worried Mind I Can’t Afford You Is This Love?