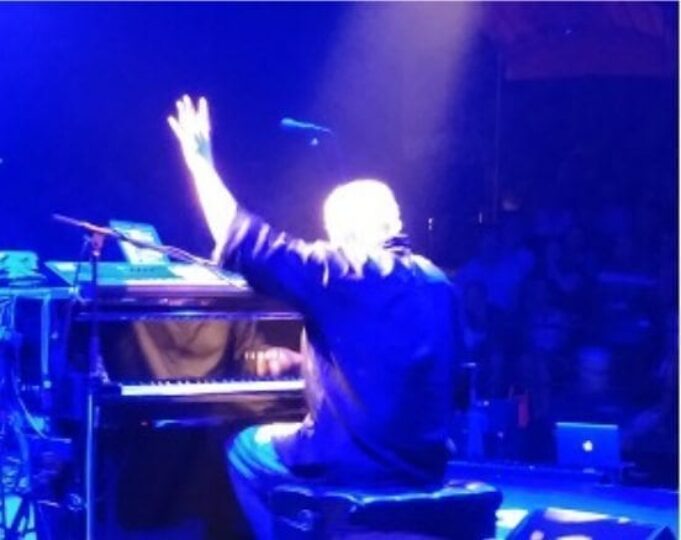 Max Creek and Bruce Hornsby and the Noise Makers

This show had all of the elements I look for going into a show-  a venue that is new to me, a band with which I am familiar but perhaps in a different than usual scenario, and a band that I have long admired but have never seen before.

It is highly unusual for Max Creek to be the supporting band, so when the two night run having them open for legendary piano song man Bruce Hornsby was announced it was instantly intriguing.  And the fact that it was in the Music Circus, a venue that my sister had worked as a lighting designer nearly thirty years ago was a huge bonus- I immediately secured us a pair of tickets.  The band threw down an incendiary set- essentially compacting their ordinary eighty minute first set into a sixty minute extravaganza.

The band trimmed down solo and improv sections to conserve time and fired through about seven songs in a tight and concisely delivered set.  Creek classics like Big Boat and Blood Red Roses were interspersed with American classics like drummer Bill Carbone’s version of  Loving You  or Mark Mercier’s take on Allen Toussaint’s New Orleans classic,  Yes We Can Can.

The set ended after an hour with Scott Murawski’s fiery and fast paced And You and I.  I remarked to him afterward that it seemed like an effort to turn a nine minute song into a six minute one, and he said “More like a fifteen minute song…”  He managed to include nearly every bit of the song into a very abbreviated version and band fast boiled their way through an amazing set.   The crowd, who consisted of some hard core fans but many folks who either hadn’t seen Creek in decades or were new to the band, gave them a standing ovation as they enthusiastically soaked up every bit of Creeky goodness.

An unusual feature of this particular venue is that it has a rotating stage: slowly turning so that you can see every part of the stage, the band’s front, side and rear views coming by you gently every few minutes.  When it’s completed it’s full rotation there is a pause for a few seconds and the stage rotates back in the other direction.  This gives you frequent views from angles you likely have never seen a band, and provides a bit of a behind the scenes peak at everything.

Something that was super cool was that during the set break (and again after the show) healdiner Bruce Hornsby chatted with Creek (backstage) about their set.  And it was more than the regular “Good set, guys..”  They actually talked about material and bassist John Rider and Hornsby both chatted about rural Virginia (the actual place from which Max Creek was named.)  It was cool to see two veterans of the road hanging out and talking music.

Hornsby came out with his band The Noise Makers (John “J.T.” Thomas, JV Collier, Sonny Emory, Gibb Droll and Ross Holmes).  I had seen Hornsby countless times (okay, about twenty..) with the Grateful Dead back in the 1990s.  This was my first time seeing him with his own band and he put on a great show. This band is very different from the Range, the straight ahead rock pop band with whom he had his hits in the 1980s and 1990s.  This band is more willing to jam and improvise, and was a great mix of various American influences.  At times they were Americana, Jazz, Jam, Cajun and Southern rock.

I recognized a few songs from the more recent catalog, and there were definitely cuts from the days of the Range.  All the songs were dressed up within the sounds of the current  band rather than an imitation of the original sound.  The band consisted of Hornsby on piano and vocals, plus players who covered fiddle, bass, drum set, lead guitar and keyboards.  These adept and flexible musicians were great listeners as Hornsby would gesture and signal who may take a solo or what direction the band may take.

Midway through, Hornsby brought a few of the band members with him to the front of the revolving stage and they satin chairs and broke things down into an even more rural sounding lineup.  Fiddle switched to mandolin, and Hornsby played the dulcimer.  The drummer switched to washboard that he played with spoons and we got really alternate versions of the band’s sound.

There were hits strewn throughout including The Way It Is and Every Little Kiss.  End of Innocence, made famous by Don Henley who wrote the lyrics with Hornsby was a very nice take on the song.   There were plenty of people there in tie dye and I expected to hear a Dead song or two but didn’t catch any.  (There may have been one to open the set but I was a little late for the start of his set.)

Bruce Hornsby seems very comfortable with who he is and the music he is performing.  He delivers hits every night likely, but probably is not delivering them in the same way.  He does not seem as if he is bent on playing or not playing any given song, content to put out his music in his own way, to teach audiences a little something about the music of his youth and his region, to deliver a little bit of his musical life to the people who come to see what he can do.  I am real glad to have seen him in a band that both showcased his history and was willing to write a bit of their own history on stage for us.