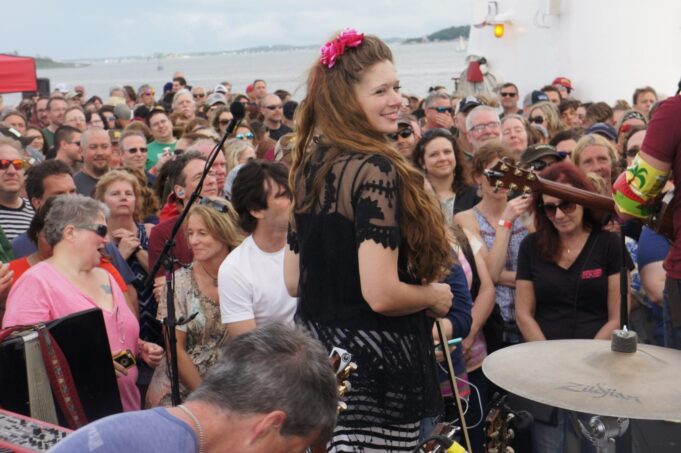 ADAM EZRA GROUP TO RELEASE: SONGS FOR A MOVIE

Adam Ezra Group’s songwriting is making waves around the country. “Let Your Hair Down,” which was co-written with producers Shep Goodman and Aaron Accetta, (American Authors), just received “Song of the Year” at the New England Music Awards. A songwriting partnership with the legendary John Oates is taking Ezra back and forth between Nashville and tour. The theme song, “Grow Your Own Way,” was central to Midwest insurance giant, Country Financial’s 2014/15 marketing campaign.

Adam Ezra’s debut efforts in movie scoring have lead to an appearance at the 2016 Tribeca Film Festival and the release of Adam Ezra Group’s new album, aptly titled, Songs for a Movie. This 16 song marathon studio production is the culmination of three years of writing, planning, arranging, and recording for the independent film release, “Folk Hero & Funny Guy.” Much of the writing and recording occurred while on tour; in hotel rooms, hallways, green rooms, and while literally driving the American highways often referenced within the album.

For help producing the album, Ezra went to friend and producer Tim Leitner, who has lent his ear and talent to the Adam Ezra Group’s View from the Root, Ragtop Angel, and Daniel the Brave releases, along with productions for The Food Network, and VH1. Josh Gold, long time keyboardist and member of the Adam Ezra Group, having produced and engineered their latest four live albums, made his debut as a studio engineer and producer on this album, recording and mixing the band from at times comical locations.

“We had just finished sound check at a show in Traverse City while on tour with Rusted Root and The Wailers,” recalls Gold. “We wanted to record ‘Both of Our Voices’ and the only room we could find was an adjacent function room in which the staff was setting up for the next day’s event. We recorded in quick bursts between the commotion and were almost through an uninterrupted guitar take when a massive a/c fan kicked on. We liked the noisy track so much we decided to keep it!”

Recording conditions were not the only thing that made the creation of Songs for a Movie unique. Ezra explains, “When Jeff Grace [writer/director ‘Folk Hero & Funny Guy’] first reached out to me, he mentioned one of the characters was a folk musician, loosely based on me. He asked me if I would be willing to create this character’s music. There was also a female musician character who needed songs as well. I ended up meeting with the actors, [Wyatt Russell & Meredith Hagner], and worked with them on writing and performing the songs on screen. At the same time we started working on producing a studio collection of all the material I had been playing with. The end result is an album that has taken us in new and exciting directions we would have never explored if simply creating an album for ourselves.”

The film is scheduled to make its debut as a feature at the 2016 Tribeca Film Festival, and Ezra has been asked to be a part of the screening. Approximately one month later, on May 22nd, in classic Adam Ezra Group fashion, the band is planning to release their album amidst 900 of their hometown fans at their annual Boston Harbor Boat Cruise.

Songs for a Movie will be available digitally worldwide that day as well.

A tireless touring outfit, the Adam Ezra Group (AEG) played upwards of 200 shows in 2015, often devoting their time to local charities and always going out of their way to connect with fans. The Group is made up of lead singer, songwriter and guitarist, Adam Ezra, Alex Martin on drums, Turtle on percussion, Corinna Smith on fiddle, Francis Hickey on bass and Josh Gold on keys. Together they are creating a powerful, inclusive community around AEG shows that is beginning to be compared to a social movement as much as a traditional music fan base.

It’s this dedication to fans that inspired the 2016 “Get Folked Concert Tour” in which Ezra ventured solo/acoustic to the homes of 30 fans in as many days and almost as many states to play house concerts throughout the entire month of January. Never walking on stage with a set-list, Ezra’s band comes ready for anything, whether it’s playing a request for a song they haven’t performed in years, to dropping traditional instruments in exchange for trash can lids and 2×4’s, to leaving the stage altogether in order to perform unplugged in four-part harmony.

“For me, a great concert should feel like a conversation amongst everyone in the room,” explains Ezra, holding fast to the notion that the best shows are those in which there is a give and take between the performers and the audience.

Another element central to the Group’s success is their commitment to giving back through their music. Ezra started his own non-profit organization called RallySound in order to better support fans and activists dedicated to making the world a better place. The proceeds from the video for the latest single “Let Your Hair Down” are being donated toward microgrants for cancer patients struggling to make ends meet while in treatment.

The Adam Ezra Group hosts a free festival each year called The Ramble. Last year over 3,000 people came out, and another 2,000 people tuned in via livestreaming from around the country, and they raised enough money to help build a handicap accessible home for Sergeant Chris Gomes, wounded during his second tour in Iraq.

Throughout the rest of 2016 The Adam Ezra Group will be on the road throughout the United States, playing music from Songs for a Movie, and working on their next studio release, slated to drop within the next year. Their goal: to reach as many people as possible while sharing their belief in the power of community and the human spirit.

“Not since Springsteen and Bono have I seen a lead singer with his talent and charisma.” — Jack Casey, General Manager WERS radio in Boston

“Adam Ezra is one of the most promising songwriters to come along in years… with the craftsmanship and insight to become a major voice in American music.” – Ben Tishler, VH1

“Hands down, the best roots rock band to come out of Boston since the Del Fuegos.” — The Alternate Root

“Ezra’s music comes across in a genre-blending style. Dave Matthews… Springsteen…. U2… Jackson Browne… But all those comparisons to better known musicians only reinforce the inescapable conclusion: the Adam Ezra Group is one of the most versatile and potent rock units anywhere.” – Patriot Ledger