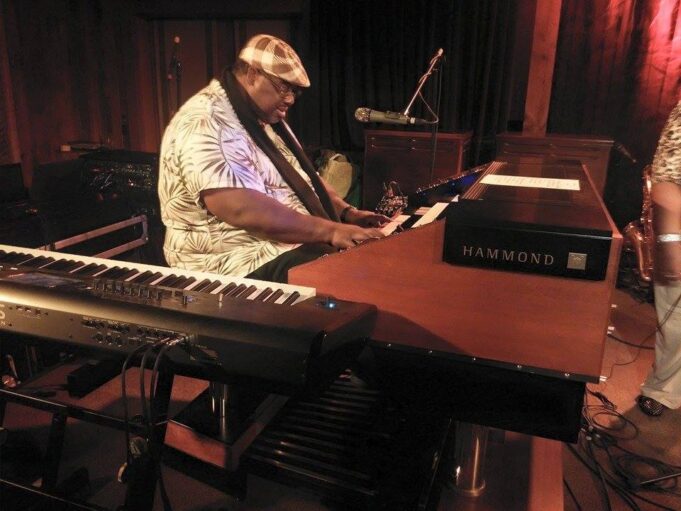 I only had short notice about this concert in terms of John Kadlecik (Furthur, Golden Gate Wingmen, Dark Star Orchestra, lead guitar and vocals) playing with Melvin, and I decided that it was too good of an offer to pass up.

The opening number was “Cats Down Under The Stars.”  It was played to perfection. Shortly before the song was over, I remember thinking how absolutely superb this version was. After the loud applause, I heard people saying that this was a great opening song. The show got better, still.

I have seen John Kadlecik play at least 15 times in 5 states. He never has a bad night; it’s always a matter of just how good he will play. His greatness is a non-issue. It was a new experience to see him connect with the great Melvin Seals and his band. (Seals and Kadlecik have a history of playing together in the band The Mix almost ten years ago).

The beautiful female harmony singers were influenced by gospel. (Shirley Starks, Cheryl Rucker)  How do I know? I really don’t but, one of them was wearing big cross earrings, which seems like a pretty big clue. Gospel seemed to ring out of their very essence. They sang “Midnight Moonlight” to utter perfection. Melvin and John were superb, and the lyrical message was not to be missed. Again, it got even better.

They played “Lay Down Sally” which was a mixture of blues, bluegrass and Jerry Garcia. There were hints of “China Cat.” John really took off and the crowd went nuts. When they played “Dear Prudence,” I could not help thinking that I was listening to John’s multiple influences.

The last number was “Ride the Mighty High.” It was, one of the best songs I have ever heard any band play. One could not escape the profound message; it was tear inducing. I contend that those of us who have been into this great music for just so long have a connection that isn’t readily explained.

Very recently Robert Hunter, in an exclusive interview with Rolling Stone, was asked to name his favorite lyric ever written. He quoted the line from “Ripple,” “Let it be known, there is a fountain. That was not made, by the hands of men.”  I for one hear this message. A spirituality does clearly exist and it binds us.

This concert was a wonderful event and a pleasure in the life that I was given. The entire band connected with the audience in a huge way, and vice-verse. I cannot envision any person leaving this show without being touched by the experience. Most of it is on Youtube, do enjoy!!!