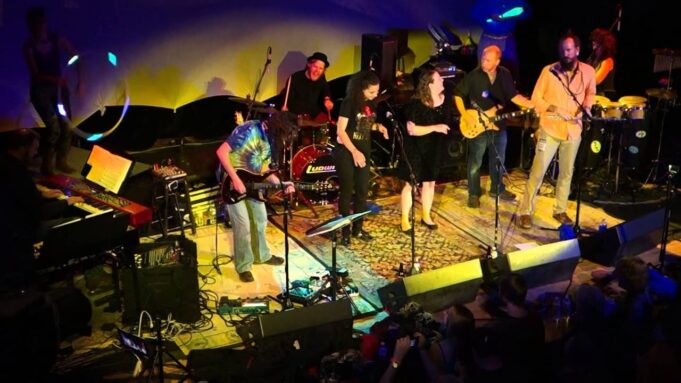 Review and photos by Brian Willis

The John K Band brought their annual holiday show (aka “Larry’s Big Assed Birthday Bash”) to a sold out State Theater crowd and nearly tore the roof off of the place. Opening act, Mateo Monk got things started with his sometimes hypnotic and always joyous music created with his guitar, flute, and melodica combined with his unique style of usage of a looper to create stunning layers of sound.

Following Mateo’s outstanding performance, JKB took the stage to the cheers of the sold out holiday crowd with a high energy rendition of “What’s Become Of Mary”, quickly followed by “Feel Like Dynamite”, a song that seemed to express the feelings of both the crowd and the band perfectly. “The Great Vehicle”- a relatively new song to the band – has quickly become a crowd sing-a-long favorite with it’s refrain of “We are the bus – and the bus is us!” Next up, Nick Newlin joined the band on accordion for a stunningly beautiful rendition of “Lazy River Road.”  Rounding out the first set, “I Second That Emotion” was followed by a cover of The Police hit “Walking In Your Footsteps” and another relatively new song, “Riverrun” with guest Mateo Monk on flute, before an exhausting yet invigorating “Complicated.”

Check out the Adam Ezra Group review from January 2 in Boston.

After a much needed break, the band returned to the stage with a short but spacey jam before a surprise reggae tinted version of Rush’s “Time Stand Still” that segued into “Liquid Silver” before landing on another fan favorite, “Sister Smiles.” A personal favorite of mine – “Dweller on the Threshold” – had the packed club in a dancing frenzy. Another personal favorite – a prolonged, stellar “Desert Trance” morphed into “Drums” with the Wednesday Night Drummers (Katy Gaughan, Mark Nickens, Ben Gordon, Chris Colvin, Aaron Gibian, Eric Vesper, Mateo Monk) leading an almost 15 minute rhythmic tribal celebration that morphed yet again into “Good Friday Experiment” before landing on “Dear Prudence.” A haunting, 8 minute version of “Mississippi Moon” segued into a rollicking “Ain’t No Bread In The Breadbox” finale. For an encore, the band finished off the night’s festivities with a sweet rendition of “I’ll Take A Melody.”

Throughout the show, the crowd was treated to The Nicolo & Shapeshifter Kinetic Show (featuring Nick Newlin and Shannon Shapeshifter) – ALWAYS FUN!!!!

John’s CD, “Liquid Silver Live” is currently available for purchase on CDBaby.  This show can be downloaded from The Internet Archive.

I Second That Emotion

Walking In Your Footsteps * >

Dweller on the Threshold

Ain’t No Bread in the Breadbox

Check out the Adam Ezra Group review from January 2 in Boston.

Check out the review submitted by Keith Gaskin of String Cheese Incident in Pt Chester, NY.