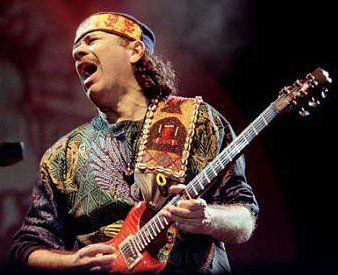 There are not many guitarists who you can tell who is playing in the first instant you hear a song. Eddie Van Halen was one, and Carlos Santana is another.

Midway thorugh his concert at the Pine Knob Music Center in Michigan the legendary guitar player collapsed and the remainder of the show was canceled. Staff quickly erected black curtains while Santana was tended to by a nurse who was in attendance at the concert, while awaiting parademics.

Update: It is reported that this was a case of heat exhaustion and dehydration. Santana is recovering.

At the outdoor amphitheatre some forty miles from Detroit MI, the Grammy award winning artist was bringing his Miraculous Supernatural 2022 Tour: Santana + Earth, Wind & Fire to adoring fans. The crowd was asked to pray for Santana for a ‘serious medic al condition’ according to multiple sources. The tour was to continue with a show in Pennsylvania this Wednesday but that show has been postponed.

The official announcement about the medical incident was published in the first hours of July 6:

“From Team Santana: Rock Legend Carlos Santana was over-taken by heat exhaustion and dehydration during a concert Tuesday (July 5) evening in Michigan. The guitar great was taken from his show at Pine Knob Music Theatre (formerly DTE Energy Music Theatre), an outdoor amphitheater in Clarkston, some 40 miles northwest of Detroit, Michigan. Carlos was taken to the emergency department at McLaren Clarkston for observation and is doing well, it was announced by Santana’s manager Michael Vrionis tonight. “The show with Earth, Wind & Fire for tomorrow July 6th at The Pavilion at Star Lake (formerly the S&T Bank Music Park) in Burgettstown, PA will be postponed to a later date. More details to follow thru Live Nation,” Mr. Michael Vrionis added.”

The most recent update on Santana’s improvement was released was just after 11A on July 6 by Cindy Blackman Santana, Carlos’ wife.:

“Hi Everyone! Carlos & I thank you so much for your prayers, love, care & concern for him! Please know that he’s resting and doing very well! He was diagnosed with heat exhaustion & dehydration… it was 100 degrees on stage and 114 under the lights so that coupled with not enough water is what caused the issue. He’ll be as good as new soon! Thank you again and we love you! Cindy & Carlos.”

The ten time Grammy award winner is an unquestioned pioneer, mixing Latin and world music elements into rock and roll. In a career that spans from Woodstock straight through to modern times as one of the biggest draws to constantly tour. Santana boasts a career record sales history of over 100 million records which is rarefied air.

We extend our fondest wishes for a safe and speedy return to health for Santana.

Tour Dates that were scheduled for this week.

Santana underwent a medical procedure that resulted in the cancellation of several Las Vegas shows late in 2021. Santana is known for his spirituality, and fans were expressing their love and support for him all over social media.