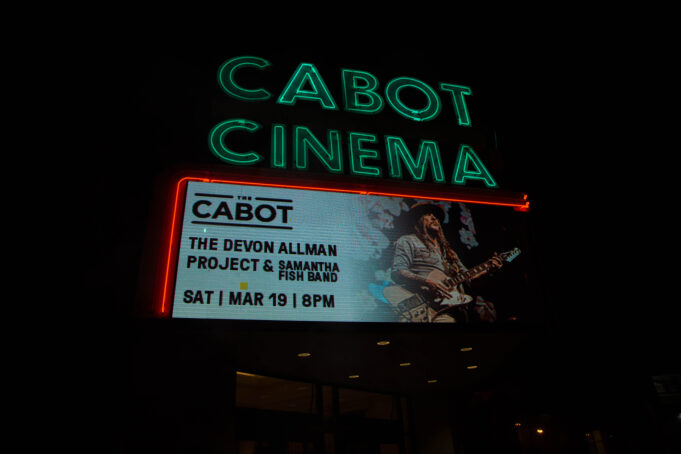 Samantha Fish Kicks Out the Jams with the Devon Allman Project

Devon Allman has been out preaching and performing the gospel of classic, blues-inspired rock with not-so-subtle nods and tributes to the Allman Brother for almost 20 years. Allman fully embraced his father’s legacy while in his 30’s and has been carrying the torch for the Allman Brothers ever since, satisfying fans hungry for Allman’s inspired music.

Following his father’s death in 2017 Devon Allman formed the Allman Betts Band with sons of three founding members of the Allman Brothers Band – Devon, Duane Betts, and Berry Duane Oakley. The Allman Betts band recorded two albums and have been touring regularly since their start. However, like most bands Covid has caused show cancellations and tour interruptions.

In January the Allman Betts Band surprisingly announced an official hiatus impacting 2022 shows that had already scheduled. To replace some of those cancelled dates Devon invited Samantha Fish to a 19-date run.

Though not musically an obvious choice, Samantha Fish and Devon Allman have a history that goes back to 2013 when Fish appeared on Devon Allman’s album Turquoise in a duet covering the Tom Petty/Stevie Nicks’ song “Stop Draggin’ My Heart Around”. Along with Fish, Allman is also including special guests from The Allman Family Revival touring band, Eric Gales, Luther Dickinson, Donavon Frankenreiter and Larry McCray for select stops along the way.

On Saturday night the newly scheduled lineup that included the Devon Allman Project, Samantha Fish, and blues guitarist Larry McCray made their stop at The Cabot in Beverly Massachusetts. The River Kittens, a folk duo that signed to Devon Allman’s Create Records in 2021 is also touring with Allman and performed at the Cabot.

The River Kittens hailing from St. Louis kicked things off promptly at 8:00 with a six song set that included some traditional bluegrass and folk originals and two wonderful covers, “Those Memories of You” (made famous by Dolly Parton, Linda Ronstadt, and Emmylou Harris) and the Faces “Ooh La La”. Check out Mattie Schell and Allie Vogler 2021 original song “Dressing on the Side.” Anyone who has waited tables or worked in a restaurant will appreciate the humor of the song and fans of acoustic music will appreciate their fresh take and endearing talent.

After the River Kittens short set and a quick intermission, the lights dimmed and the MC5’s “Kick Out the Jams” came booming through the sound system. The hard rocking classic entry music was a signal that Samantha Fish’s stripped-down set (smaller band with no horn section) would be a rocker, favoring her expert blues guitar rock over her more recent pop and soul leanings.

Fish wasted no time electrifying the crowd right from the start with the song “Bulletproof” off her 2019 release, Kill or Be Kind. The song which usually appears at the very end of her set is a driving rock rave-up that features Fish’s signature four sting guitar box guitar and distorted vocals.

From there Samantha Fish was off and running delivering a tight and focused seventy-minute set. “Loud” off her latest album, Faster starts as a ballad but quickly goes into a heavy metal riff. “Twisted” also off the Faster release is a straight up blues rocker that would fit nicely on a Joe Bonamassa album with its hard guitar soloing and recurring refrain.

Check out the full gallery of photos of Samantha Fish from this night here.l

Things slowed down a bit with the Barbara Lewis R&B classic “Hello Stranger” which Fish delivers with the same sweet, soulful smoothness as the original. One of the highlights of the evening came up next with the roadhouse blues “No Angels.” Playing her red Gibson Firebird guitar. Fish delivered the nastiest slide and blues guitar of the evening. There was an attempt at audience participation but most of the audience was too spellbound to participate.

The Red Firebird stayed out for “Bitch on the Run,” another high energy crowd pleaser that included band introductions (Sarah Tomek – drums, Ron Johnson – bass, Matt – keyboard). Fish brought back the white Gibson SG and along with blues guitarist Larry McCray for another highlight of the evening, a cover of Screamin Jay” Hawkins,” I Put a Spell on You.”

The set closed with “Black Wind Howlin’” from the 2014 album by the same name. Fish left the crowd euphoric with the almost ten-minute song that ended with a thrashing guitar crescendo.

Under dim lighting the six-piece Devon Allman Project, which was the headline act took the stage next. You must give Allman credit for bringing Samantha Fish out on tour with him since she is a tough act to follow, especially when she’s playing a set filled with so much guitar driven ferocity.

But Devon Allam is a seasoned musician, and his set is filled with inspired originals like the instrumentals “African Introduction” and the percussion heavy “Sahara” along with Allman Brothers material.

Vocalist and longtime Allman family band associate, Jimmy Hall came out with Larry McCray mid-way through the set and performed Allman Brothers classics “Trouble No More,” “Dreams” and “Mr. Easy” which is featured on McCray’s 2022 album Blues Without You.

Check out the full gallery of photos of Devon Allman Project from this night here.

All the musicians came out for a two-song encore that included Fleetwood Mac’s “Dreams” and then Hall’s 1974 hit single “Keep on Smilin”. The two covers with the entire cast of the evening’s proceedings were a special moment and the mix of musicians on stage, Fish, Allman, McCray, Hall, Schell and Vogler etc. made for an unlikely but savory musical stew spiced with melodic vocals, beautiful harmonies, masterful guitar, and band interplay. Everyone was genuinely enjoying the moment and Hall clearly did not want to leave the stage before finally bringing the whole wonderful night to a close.

Check out the full gallery of photos of Samantha Fish from this night here.

Check out the full gallery of photos of Devon Allman Project from this night here.