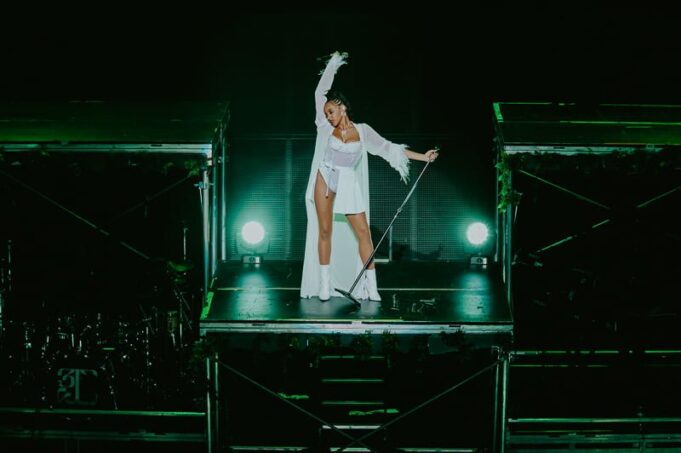 On October 19th Tinashe brought her 333 Tour to the Warfield in San Francisco. This concert was the second to last show of her tour, with her final performance being in Seattle on the 21st. Tinashe went all out for this tour with a band,  backup dancers, dance routines, and a high-rise platform that elevated her off the stage so everyone could see her no matter where they were in the concert hall.

To kick off her 32 song set, she performed “I Can See the Future,” a promotional single that announced her 333 album that she released in early August. Tinashe stayed atop the platform for most of her set but occasionally came down and interacted with the crowd, which defiantly made some of her fans’ day.

With Tinashe’s dance background, she is no stranger to putting on a great show, and that’s precisely what she did. The choreography for each song was incredible, and you could tell she was enjoying herself because she could not stop smiling in-between songs.

The crowd’s favorite song of the night was her song “2 On,” the first single from her 2014 debut album Aquarius. Her fans joined in and sang along to the lyrics perfectly because, of course, all her fans would know the words to her songs.

The last song she sang was “Undo (Back to My Heart),” another song from 333. Then, for her encore, she performed “Pasadena,” the lead single from 333, which was a perfect way to end a fantastic night.