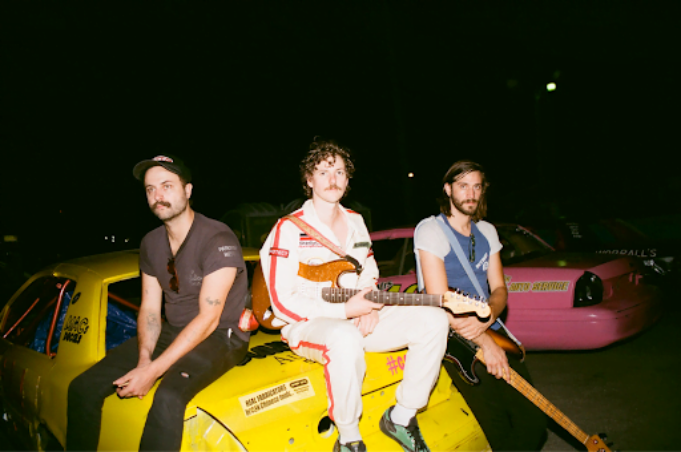 The brand new album is released today while the band prepares to head out on tour next week.

Today, Houndmouth — vocalist/guitarist Matthew Myers, drummer/vocalist Shane Cody, and bassist/vocalist Zak Appleby — release their new album Good For You on Dualtone Records. Recorded with Brad Cook (Waxahatchee, Hiss Golden Messenger) and mixed by Jon Ashley (The War On Drugs, B.J. Barham), Good For You finds Houndmouth reckoning with both the blurry highs and hard-earned lessons of young adulthood as it passes by in the rearview mirror. In a 4-star review, MOJO calls it “an escapist tonic” that is “highly attuned to nuances of mood and scene setting,” while No Depression commends the “beautiful ache” that reverberates through Myers’ songwriting.

Brought to life in Houndmouth’s longtime headquarters — The Green House, a 19th-century shotgun-style residence decked out in gold wallpaper and crystal chandeliers that used to belong to Cody’s grandparents — Good For You emanates with a sense of bittersweet nostalgia.

Songs veer from Silver Jews-style vignettes (“Good For You”) to boozy shout-alongs (“Make It To Midnight”) as Matt Myers artfully paints portraits of down-and-out characters and drunken romantics with a magical realist’s touch.

Houndmouth are kicking off a 19-date headlining tour on November 12 (see full dates below). Bear witness to their live prowess — cultivated on a long road that’s taken them from Lollapalooza and Bonnaroo to the late night stages of Conan and Letterman — in their recent performances for CBS Saturday Morning.

In the video for their single “Las Vegas,” Matthew Myers does his best Evel Knievel as he and his bandmates take to the Clarksville, IN SportsDrome for some Kentuckiana Auto Racing. Watch “Las Vegas,” directed by Francis Thomasovich.