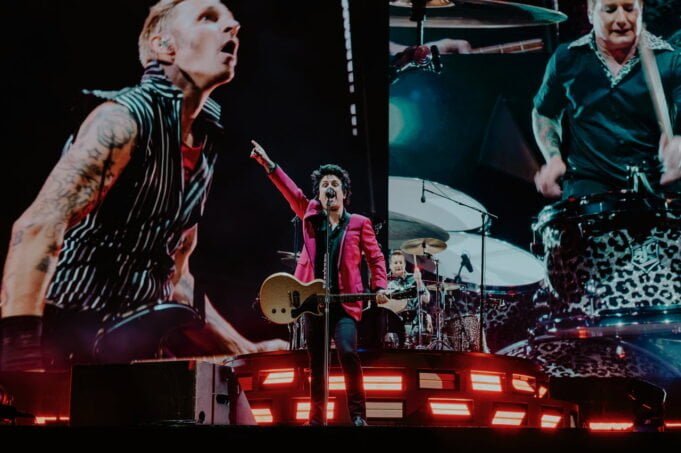 After two years in the making, the East Bay’s Green Day finally brought their Hella Mega Tour back home on Friday, August 27th. The show took place in Oracle Park in San Francisco, which took days to set up in between Giants games.

The show had approximately 40,000 people in attendance and was probably the most crowded place most people have been in for a year and a half. Along with Green Day, the evening also had impressive performances by The Interrupters, Weezer, and Fall Out Boy.

Hero
Hash Pipe
All the Good Ones (Partial; guitar solo… more )
Beverly Hills
The End of the Game (Ended before the bridge)
My Name Is Jonas
Pork and Beans
Feels Like Summer
All My Favorite Songs
Undone – The Sweater Song
Surf Wax America
El Scorcho
Island in the Sun
Africa (Toto cover) (Rivers & Patrick drum… more )
California Snow (First verse and chorus only)
Say It Ain’t So
Buddy Holly

The Phoenix
Sugar, We’re Goin Down
Irresistible
Uma Thurman
Grand Theft Autumn/Where Is Your Boy
Save Rock and Roll
The Last of the Real Ones
Dance, Dance
A Little Less Sixteen Candles, a Little More “Touch Me”
This Ain’t a Scene, It’s an Arms Race
My Songs Know What You Did in the Dark (Light Em Up)
I Don’t Care
Thnks fr th Mmrs
Centuries
Saturday

It was a night filled with a lot of great music and some spectacular pyrotechnics. To kick off the show, Green Day played their smash hit “American Idiot,” which made me feel like I was back in the early 2000s. With thirteen albums under their belt, they have so many songs they chose from, like “Holiday” and “Wake Me Up When September Ends.”

Green Day also played several covers, including Kiss’s “Rock and Roll All Night.” During their cover of “Knowledge” by Operation Ivy, they brought an 18-year-old fan who’d been playing the guitar for six years up on stage to socially distance rock out with them and then received the guitar as a gift after the song was over. Overall, it was a great night, and everyone was just so happy to be experiencing live music again after so long finally, and there was no better way to do that than the Hella Mega Tour.

American Idiot
Holiday
Know Your Enemy
Pollyanna
Boulevard of Broken Dreams
Longview
Welcome to Paradise
Hitchin’ a Ride
Rock and Roll All Nite (KISS cover)
Brain Stew
St. Jimmy
When I Come Around (With snippets of AC/DC’s “You… more )
21 Guns (Ended after guitar solo; went… more )
Minority (With band intros)
Knowledge (Operation Ivy cover) (With a fan on guitar)
Basket Case
She
Wake Me Up When September Ends
Still Breathing
Jesus of Suburbia
Good Riddance (Time of Your Life)