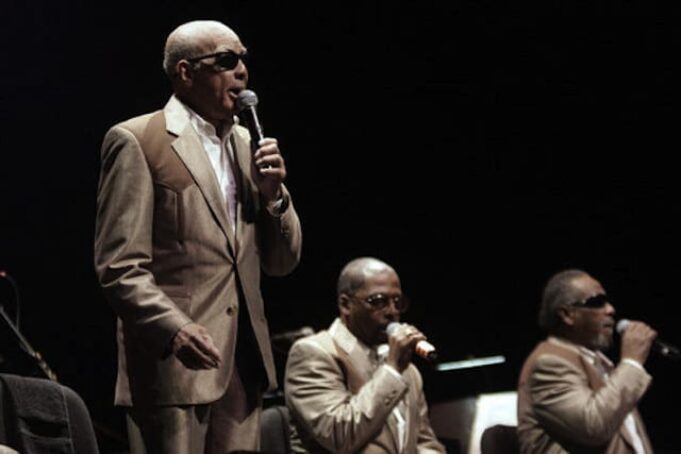 Two icons of American music collaborated on the first ever “Spirituals To Funk” concert that is touring America this autumn. Dr. John is an ambassador of all things New Orleans as his music testifies flawlessly. The swampy gris gris of “Iko, Iko” revved up the Lower 911 band he tours with. He showcased music from his latest CD “Locked Down” due out this April. “Revolution” and “Big Shot” had a slight departure from style with a hip R&B sound geared up with a younger set of musicians. Trombone solos by Sarah Morrow were hot.

Dressed in a purple suit and fancy hat, Dr. John pounded the funky strutter “Right Place, Wrong Time” with its throbbed rhythms of funk ecstasy which plunged the audience over the edge. “Such A Night” delivered a smooth blues streaked soul sound with solid piano intro and outros by Dr. John.

The tone was set as the gold suited Blind Boys of Alabama stepped into their sacred ground to sing the spiritual “People Get Ready” accompanied by a sweet slide guitar solo by John Fohl. Their pure hearted harmonies humbled and moved the audience to sing and sway. “Spirit In The Sky” had everybody rockin’ true. Dr. John backed them on keyboards for the fantastic dazzle of “There Will Be A Light.”

The folk standard “If I Had A Hammer” turned into a glorious gospel jazz handed stomper. Dr. John soloed rock n’ roll guitar with a solid punch on “Let The Good Times Roll.” Bass player David Barard jazzed a funky bass solo. He sang lead on a bluesy spirited “When The Saints Go Marching In” to the Blind Boy harmony. The concert encored with the gospel standard “Since I Laid My Burdens Down” for the send off.

If you have any live music news, show reviews, or a concert memory you’d like to share, hit us up at [email protected]