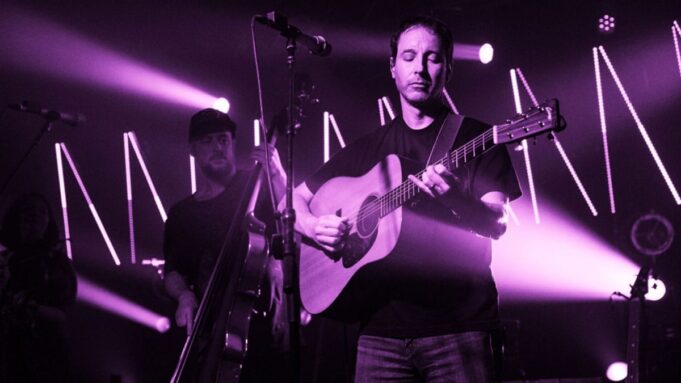 It has already been a long week and the to-do list just keeps growing. I know the show is going to be fantastic yet I have to talk myself into getting in the car to make the 40+ minute trek to the Cat’s Cradle.  Within minutes of walking into the venue, I forget all about the stresses of the week.

Tonight is the second stop on an eight show Yonder Mountain String Band and Travelin’ McCourys run and both bands held me captive and made me forget all about tomorrow’s early morning alarm.

In typical Travelin’ McCourys fashion, the band moved seamlessly between powerful, hard driving bluegrass numbers, the beautiful Grateful Dead arrangements they’ve become known for and expertly delivered instrumentals. While The McCoury brothers, Ronnie and Robbie, are both outstanding musicians born into the bluegrass tradition, they have forged their own path and surrounded themselves with an exceptionally talented cast of musician’s. With fiddler Jason Carter, bassist Alan Bartram and Cody Kilby on guitar, the band has created a sound that is all their own.

Check out the full gallery of photos by Willa Stein here.

After acknowledging the mega shoes they had to fill following the Traveling’ McCourys, the Colorado based Yonder Mountain String Band opened the second half of the show with Polka on the Banjo and never tired from there. The group of seasoned musicians includes Adam Aijala on guitar, Ben Kaufmann on bass, Dave Johnston on the five string, and crowd favorite Allie Kral on fiddle. Newest member Nick Piccinni wowed on mandolin and fiddle with the twin fiddles being a crowd and personal favorite.

Having gotten lost in the beautiful music and let the stress of the work week subside, there was no missing the super group encore. The encore included Merle Haggard’s Mama Tried and John Hartford’s Vamp in the Middle, and kept those of us who stuck out the marathon of music dancing until the very end. Both bands look as if they could play all night and the triple fiddle and expertly traded licks on mandolin and guitar left no question that the night was worth every hour of lost sleep.

Check out the full gallery of photos by Willa Stein here.

Drop us a line at [email protected] with your live show review or live music news or festival preview or feature article or just to say Hi!