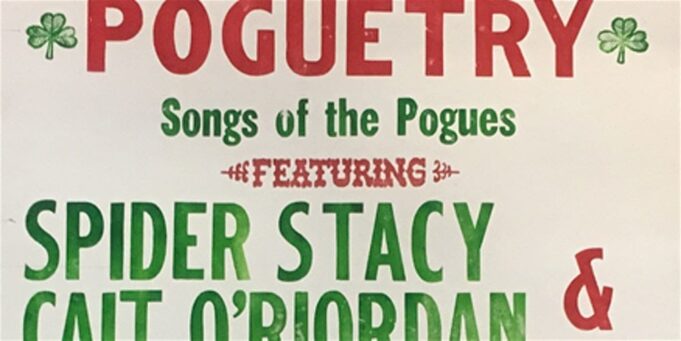 Original Pogues members, Spider, Stacy, and Cait O’Riordan, accompanied by Grammy-winning Lost Bayou Ramblers will be undertaking their first proper tour of select U.S. markets playing the iconic songs of the Pogues under the banner of “Poguetry.” The Ramblers will be playing their own set to kick shows off.

Spider has been singing and playing tin whistle backed by the Ramblers since 2015 and in 2018 added O’Riordan to the mix after they played together again at Shane MacGowan’s 60th birthday celebrations at the Irish National Concert Hall that year.

The Pogues emerged out of London in the early 1980’s, playing an incendiary music that merged punk rock ferocity and Irish lyricism, an intoxicating rush of accordions, banjos, and tin whistles driven by a locked-tight rocknroll rhythm section and gathering lifelong fans along the way including Tom Waits, Bob Dylan and The Clash’s Joe Strummer — who even fronted the band for a while.

Spider relocated to New Orleans 10 years ago where he has been slowly working on a Pogues Musical with The Deuce and The Wire production team David Simon and George Pelecanos, and New York Times best-selling author Laura Lippman.

“I saw the Ramblers play back in 2011 and immediately recognized them as kindred spirits,” says Stacy. “I felt they’d be a fantastic vehicle to give the old songs some new life. I’m not ready to stop playing live, but at the same time, I don’t think the world needs any new music from me, so this works nicely. Bringing Cáit in just took us up another level.”

Lafayette, Louisiana’s Grammy-winning Lost Bayou Ramblers just celebrated their 20th anniversary as a group. They released a deluxe DVD/CD package comprising the On Va Continuer! documentary on the band and its mission to preserve and promote the Cajun French culture and language through their music and the Asteur live album recorded in 7 venues around New Orleans.

After being awarded a Grammy for Best Regional Roots Music for Kalenda – which features a guest spot from Spider -the group issued the Rodents of Unusual Size (Music from the Motion Picture) featuring their original score for this documentary. Soon after, they composed and recorded another original score, this one for director Brian C Miller Richard’s feature film, Lost Bayou. Other film credits include contributions to the Oscar-nominated Beasts Of The Southern Wild. They ended 2019 with New Orleans’ Gambit Weekly’s Big Easy Awards naming them “Entertainers of the Year.”

Drop us a linte at [email protected] with your show review or live news story.