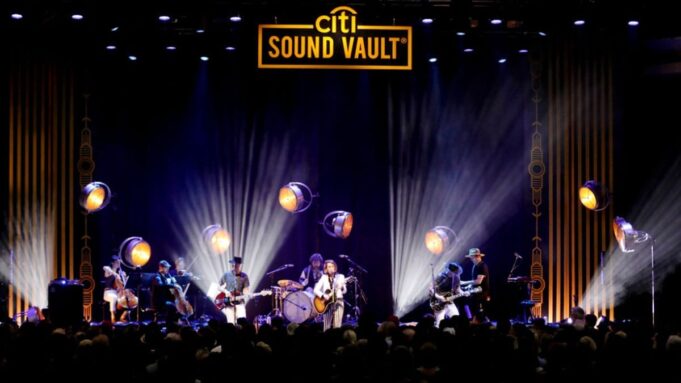 Brandi Carlile has come a long way since she debuted “The Story,” the title track off her 2007 album produced by T-Bone Burnett, at the much smaller and intimate venue Hotel Cafe, right near the Hollywood Palladium, where she just performed the same song again, among many others from her catalog of six albums, last week to a sold-out crowd.

She spoke about that experience and shared several other stories and anecdotes about her humble beginnings earlier in her career, her wife Catherine and her daughters Evangeline and Elijah, and referred to the stress and pressure of the upcoming GRAMMY award show and how this show was an opportunity to let her just do the music and rock out.

Not only was the show a lot fun, and she looked like she was having a great time doing what she loved and sharing her passion. The audience interaction truly felt personal as Carlile really reached out to her fans to draw them in closer to reveal the experiences she goes through in life as person not just a “rock star.” She also thanked her longtime collaborators/songwriting partners identical twins Tim and Phil Hanseroth, on bass and guitar,  who Carlile has been with since she started her band with in Seattle, Washington in the late 1990s.

Carlile also spoke about Joni Mitchell, who she honored and paid tribute to last year at Walt Disney Concert Hall in Los Angeles. There, she played the whole seminal album, “Blue,” in front of Mitchell. She also sang to her “A Case Of You.” She explained to the audience that performing in front of Mitchell brought out fear in her like nothing else. Carlile also shared more about her three favorite songs naming “Hallelujah” by Leonard Cohen, “I Will Always Love You” by Dolly Parton  and “A Case of You” by Mitchell as the best songs ever written.

This performance, one of four sponsored by the Citi Sound Vault at the Hollywood Palladium in Hollywood, CA, was held on Thursday, January 23rd, was exclusive to Citi credit and debit cardholders. Carlile’s music spans multiple genres including pop, rock, alternative country and folk marked by emotionally powerful and vulnerable songwriting.

Among her many accomplishments in the music industry, Carlile has earned seven GRAMMY Award nominations, including one for The Firewatcher’s Daughter and six for By the Way, I Forgive You. She was the most nominated woman at the 61st Annual Grammy Awards (six) including nominations for Album of the Year (By the Way, I Forgive You), Record of the Year and Song of the Year (“The Joke”). In 2019, Carlile also embarked on a separate project forming an all-female quartet with Amanda Shires, Maren Morris and Natalie Hemby called The Highwomen. Now, she is nominated for four awards including Song of the Year and best country song for “Bring My Flowers Now,” which she co-wrote with country legend Tanya Tucker for her comeback album, While I’m Livin’.

Carlile shares co-production duties with Shooter Jennings. The album was nominated for best country album. Carlile was also nominated for best country performance by duo or group for “Common,”  a duet with fellow country star and her The Highwomen member bandmate, Maren Morris. This entertaining and enjoyable show, which had a loose feel to, it reached back to earlier material like “The Eye” and “Mainstream Kid”  to Carlile’s most more current work including “The Joke, “Hold Out Your Hand,” the endearing and heartwarming tune, “The Mother,” and “Sugartooth” from the extensive and generous 16-song set.

Brandi Carlile and her talented band delivered a satisfying show that played to her many strengths as a great storyteller, excellent singer/songwriter, a consummate musician, and a totally natural at entertaining besides being completely at ease and secure in herself to keep it “real” with her audience that makes her live performance seem so effortless.

Encore
Mainstream Kid
Party of One

From the Grammy awards just a few nights after this live show. January 26.