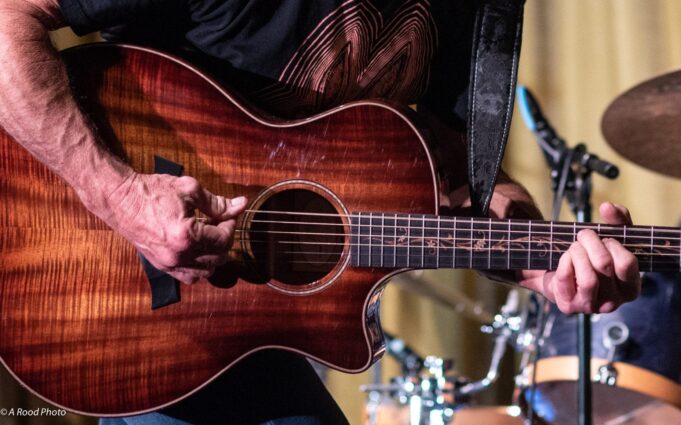 In 1989, we saw a tiny bit of Dennis Quaid’s musical acumen in the Jerry Lee Lewis biopic, Great Balls Of Fire. While the movie wasn’t necessarily a hit, it did cement Quaid’s reputation as a musician in his own right.  Jerry Lee Lewis,  legend has it, was surprised at how good Quaid’s versions of his songs were. We now know what The Killer has known about Quaid for the past thirty years judging by the release of his solid, full-length debut, “Out Of The Box” from Omnivore Recordings.

Quaid, and his band of eighteen years, The Sharks, performed selections from the album at a record release party at Village Studios in Los Angeles and showed the audience he not only has a passion for music, but he is also an accomplished songwriter and performer with a hell of a backing band to boot.

Between original songs including “Good Man, Bad Boy,” a bluesy rocker with a hint of Jerry Lee Lewis-style piano playing, the anthemic title track “Out Of The Box,” the country-tinged ballad “On My Way To Heaven,” and two Doors covers (“L.A. Woman” and “Riders On The Storm”), Quaid shared stories of past movie roles and life lessons with the crowd. He proved his mettle during the upbeat set with songs and a performance that showed that he does not have a flash-in-the-pan fascination with being a musician, but, hopefully, is here to stay, and we look forward to seeing what’s next.

A full gallery of photos from this show by Stevo Rood is located here.

LMNR was able to catch up with Dennis Quaid after this show to talk about the band.

LMNR: Tell us how you feel about playing in a band.

LMNR:  What does making music feel like to you?

Dennis Quaid:  It makes (for) a good time and reflects our times. That relationship means a lot to us.

LMNR:  Becoming a musician and forming a band for someone with your experience is a big challenge.  What’s it like for you?

Dennis Quaid:  It’s a motivator that drives us toward our goal of being “the oldest guys to make it in Rock And Roll.”

I’m In Love Not Fade Away (Matchbox) You’re So FineOut Of The BoxGood Man, Bad BoyRiders On The StormL.A. WomanAfter The FallWalk With The Angels