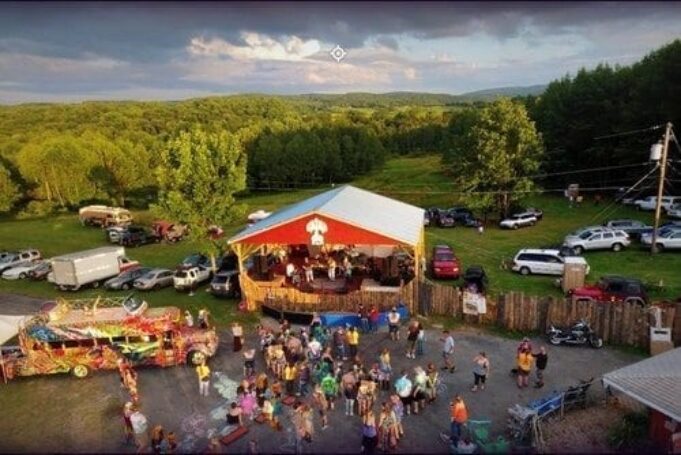 There’s something about Mt Sky that endlessly charms me. This is a small group of like minded Deadhead/music loving folks who’ve acted on the dream of establishing a festival facility. But they didn’t just talk about it, they’ve actually done all the hard work to make it happen! They’ve secured a gorgeous 110 acre site at the top of a mountain, navigated all the complex issues with the locals, built it all up by hand, and now they’re in their 6th season of operations! Each year bringing incremental improvements to the facility. This was a Herculean feat when it comes to the $$$ involved, the risks, and the behind-the-scenes efforts of doing something like this. Very proud of Ragu and his extended family for creating something very special here.

Editor’s Note:  We were at Mtn Sky for this Grateful for Spring event last year and were able to capture audio and video including Flux Capacitor, John Kadlecik, Mountain Sky Orchestra and several other bands.

Check out the review of the 2017 edition here.

At this point, I’m hitting Mt Sky at least 3x a year. Their spring opener: “Grateful for Spring,” Summer’s “Stonehenge,” and their fall closer, “Stiil Gratefulfest.” There’s also the “Satellite Ranch” festival, a little more towards the EDM genre that I hope to get to as well. Some events are managed internally, some are run by outside promoters, but each event has a vibe all its own. This s

eason’s roster includes a handful of other events too, including a country music fest, a bluegrass/blues fest, and “the Inclusion Festival” which is the first of its kind, an immersive experience for special needs folks. I usually roll solo to Mt Sky. Being the type that likes to work and be involved, I’ve fallen into a role as volunteer stagehand. I help incoming bands load in, outgoing bands load out. I usually focuse on the musicians that have more voluminous gear like the percussionists, the keyboardists, or the bass players, but will lend a hand wherever there’s lifting and moving to do. Sometimes that means erecting a tarp or fence, moving the house drum kits around, helping the lighting/sound guys, or dealing with a myriad of small oddball emergencies, like helping to push a stuck band’s van out of the mud. I enjoy the opportunity to be helpful to so many people at once, AND I get to see practically every note that’s played. I’m sure my participation goes a long way towards keeping the production on schedule and towards keeping the musicians more relaxed and focused on “performance” rather than “logistics,” which I hope equates to playing better!! I also enjoy the opportunity to have a small role in the success of Mt Sky’s events. When I was a younger festival-going dreamer, I often said to myself “I want to be the guy who runs festivals!!! I can do this!” Reality is that my growing association with Mt Sky may be the closest I’ll ever get in this lifetime. I’m honored to be considered part of the team, if only for a few random days!

My attraction to Mt Sky festivals is only intensified by it’s close proximity to several fantastic Mountain Biking parks. For Mt bikers, this is a “hot zone.” There’s Lackawanna State Park (LSP), Merli Sarnoski Park, and Moosic Mt (aka Dick and Nancy Eales Nature Preserve) all within 15-20 minutes from Mt Sky. And just a bit farther is Prompton State park (30 mins). My modus operandi is to get a serious  mountain biking ride in during the mornings, and get into stagehanding duties for the rest of afternoon/evening. Talk about a full-on crossfit session!! Nothing makes me happier than the buzz from a good solid heart-pumpin’ ride, followed by a night of rippin’ music. (If any of you serious Mt bikers out there ever want to join me for a ride before the music starts…track me down, I’m not that hard to find!). While on the subject of Mt biking…speaking with Ragu…we both agreed how awesome it would be to have a trail system on the Mt Sky property someday! Who knows, maybe in time, with the help of some trail builders, we can scratch out a competent loop somewhere.

So off I went to the festival! I arrived just after dark on Thursday to see if I could lend a hand to the production, but there really wasn’t much I could do as all the heavy lifting was done before my arrival. So I just set up camp, crashed, and got ready for my Friday 09:00 Mt Bike ride at LSP. On Friday, I met up with a buddy and did a tremendous 14mi ride in gorgeous weather. (Saturday was so rainy that I didn’t ride at all). I got back to Mt Sky around Noon on Friday to jump in and help with the additional setup. The music started around 3pm. MiZ and Escaper (doing 2 full sets) were my favorites of Friday. I stayed up as long as I could, but conked out around midnight, while the music continued into the wee hours. I woke up on Saturday to the sound of steady rain on the roof of my van. Made for a perfect excuse to sleep in! I think I woke up at an unheard of 10:30am! The weather, once again, was disappointing. Two fests in a row for me, maybe I’m bad luck. While Friday was a spectacular day for biking and festivalling, Saturday was steadily raining all day. I mean…allllll……dayyyyy! Finally stopping for a few hours during the headliner. Sunday switched back to more rain (judging from the weather in NJ…I was gone by then. I left Saturday night to work another event). While a couple of outdoor stage acts were moved indoors to the lounge, the music schedule was mostly unaffected by the weather. Fortunately when it rains, the troopers that come to Mt Sky could care less. They either get out the raincoats, hang out under the big top, or listen to the music from their tents! (You can hear the mainstage from wherever you are on the property). My favorite sets of Saturday were Goose, and Jam Stampede (featuring Kenny Brooks of Ratdog and members of Zen Tricksters). With many other notable performances on the other stages too.

With three stages (a Main stage, The Camp stage (a tarped stage fabricated from branches from the surrounding woodlands), and an indoor Lounge stage), music was plentiful. Also sequenced nicely so one act followed another. You really didn’t have to make the tough schedule choices between competing music acts that sometimes presents at the bigger festivals. I’d say about half the music I heard over the weekend really captured me, which is pretty good for a small festival. Some of it downright jaw dropping! It’s almost always shocking to me that such intense music can be found at some other place than at the slick show put on by the $100/seat big name national touring act at the inner city concrete & glass arena. Attendance was a little sparse at this one, none of that helped by the shitty forecast. It pains me to see such hard work by staff, band, vendors, support staff/volunteers…and the guests themselves… not be enjoyed by more paying attendees. I really want Mt Sky to thrive, and I know that each time they’re in the red threatens their very existence. Those who did make the effort were treated to a fine time though!! My advice to all of you out there in festival-land is to try to make it a point to get up to Mountain Sky and see what it’s all about! You won’t be sorry. I suspect you’ll feel quite at home, and get addicted to such a chill scene. The vibe is pretty relaxed up there, kind of like going to a private party where only the cool people have been invited. Did I mention the jaw dropping music?

Editor’s Note:  We were at Mtn Sky for this Grateful for Spring event last year and were able to capture audio and video including Flux Capacitor, John Kadlecik, Mountain Sky Orchestra and several other bands.

Check out the review of the 2017 edition here. Check out the Live Music News and Review.com Facebook page for updates and announcements.