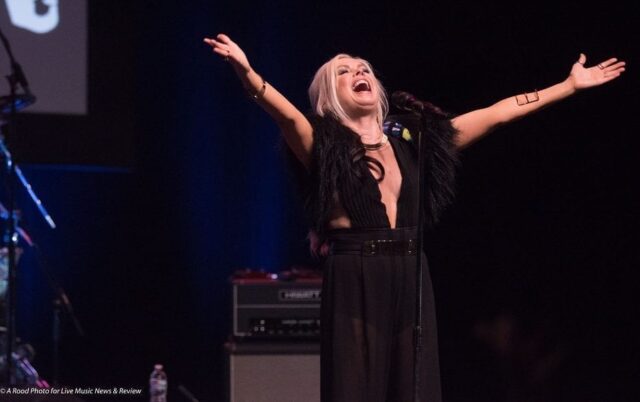 Terri Nunn and Berlin The Saban Theater, Beverly Hills, CA November 4, 2017  Story by Stevo Rood To submit a review or story for consideration hit us at lmnandr@gmail.com Check out the Live Music News and Review.com Facebook page for updates and announcements. And check out the full gallery of photos of this show by Stevo Rood here. From the video channel of BrianJames https://youtu.be/6x-tcYqbrtI?t=9 Terri Nunn and Berlin felt right at home on Saturday night at The Saban Theater in Beverly Hills. Formed in 1979 in Orange County, the band had a string of hits with songs like “The Metro,” “Sex (I’m a. . .),” “Take My Breath Away” (featured in the movie Top Gun) and “No More Words,” all of which were received with cheers from the audience.

As is common with bands, musicians come and go over time but for this show, we were fortunate enough to have three special guests, two of which were founding members of Berlin! John Crawford (on bass) and David Diamond on guitar joined Terri on stage for several songs. What a rare treat that was! A few other highlights of the show included the third special guest, Jamie Savko from the Waddy Wachtel band who came out and sang AC/DC’s “Highway to Hell” with Terri. Another moment was when Terri invited audience members onto the stage and dance with her during the fan favorite “Dancing in Berlin.” To close out the evening, the band performed “Scream” which received the most votes online from a request for fan’s favorite song to be played, and the final song of the night was a cover of

Jefferson Airplane’s “Somebody to Love” which Terri killed with her covering Grace Slick’s vocals!   From the YouTube channel of BrianJames: https://youtu.be/FxME9EVIBM8?t=3 SETLIST: No More Words

The Metro Masquerade Matter of Time Like Flames Animal

Sex (I’m A) Highway to Hell (AC/DC cover) Encore: Scream Somebody to Love (Jefferson Airplane cover) To submit a review or story for consideration hit us at lmnandr@gmail.com   And check out the full gallery of photos of this show by Stevo Rood here. Check out the Live Music News and Review.com Facebook page for updates and announcements.