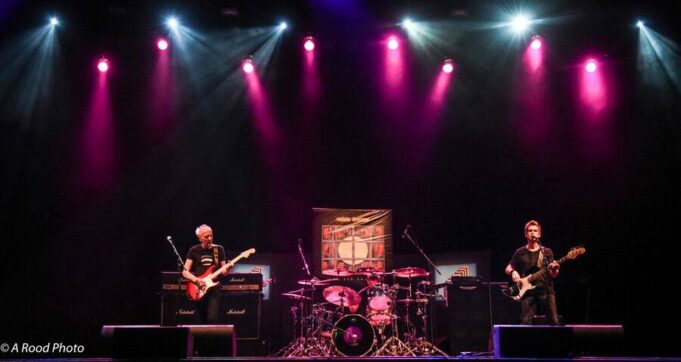 Robin Trower returned to Los Angeles on May 21st performing and promoting his latest solo album ‘Time and Emotion.’   That album has climbed to #2 on the Billboard charts, quite an accomplishment.  The show was at the stately Wiltern Theater, an art deco building in Los Angeles that has become a favorite concert stop.

Robin Trower, now age 72, showed no sign of slowing down and really appeared to be enjoying himself on stage. He delivered on every song with his signature guitar licks and style that captivated the entire audience. Although, Robin was competing against U2 performing across town at the Pasadena Rose Bowl, The Wiltern Theater was all but full with dedicated fans who knew where the real ‘show to see’ was playing in town! Besides performing tracks off his latest release, Robin still remembered to give the fans the two songs that everyone always looks forward to at every show:

Day of the Eagle into Bridge of Sighs.

From the video channel of Robert Starkman

The band appeared as a simple three piece, with Trower on lead guitar accompanied only by bass and drums with some vocals. Thanks for a great show Robin!  For those who want to catch his show, Trower will be touring throughout the west coast over the next couple of weeks with stops in Petaluma, San Francisco, State Line, NV, Eugene, Portland, Sacramento and Seattle. The show was about 90 minutes in length and ended in a two song encore.

This is at least a partial set list from that night, culled from setlist.fm

If you were there and you wanna tell us more about this show or set list, hit us up at [email protected] and you can contribute to this story!

From the video channel of Robert Starkman

ABOUT ROBIN TROWER: Robin Trower (born Robin Leonard Trower, 9 March 1945, Catford, South East London, England) is an English rock guitarist who achieved success with Procol Harum during the 1960s, and then again as the bandleader of his own power trio. Biography Trower grew up in the seaside resort of Southend-on-Sea, Essex. In 1962, Trower formed a group that became The Paramounts, later including fellow Southend High School pupil Gary Brooker.

The Paramounts disbanded in 1966 to pursue individual projects. During this time, Trower created a local three-piece band called ‘The Jam’ – not to be confused with the later group with Paul Weller. Trower then joined Brooker’s new band Procol Harum in 1967, with whom he remained until 1972. Before launching his own eponymous band, he joined singer Frankie Miller, bass player James Dewar, and former Jethro Tull drummer Clive Bunker to form the short-lived combo Jude. This outfit did not record and soon split up. Trower retained as his bassist Dewar, who took on lead vocals as well, and recruited drummer Reg Isidore (later replaced by Bill Lordan) to form the Robin Trower Band in 1973.