Story and photos by Stacey Rose

This is one of those acts that you hear a lot about, so you go into it with high expectations and pretty sure they can’t possibly be as good as the hype; they are, though. Of course, when some of that praise comes from Genesis themselves, that ups the stakes considerably. Peter Gabriel has said he has taken his kids to see The Musical Box “so they could see what their father did back then.” So, yeah, they’re really good.

If you never got to see Genesis back in the ’70s, as I hadn’t, you must go see The Musical Box, a Peter Gabriel-era Genesis tribute from Montreal.  This is beyond tribute though.  The Musical Box is sheer theater, a reproduction down to every last detail musically and visually including in-between song stage banter.

The Musical Box is currently touring with three shows:  “Foxtrot,” “Selling England by the Pound,” and “The Black Show.”  We got The Black Show, which I understand is a show known to hardcore Genesis fans, only done in North America, and never officially recorded by Genesis, but can be found on grainy bootlegs if you look hard enough.  Lucky us though, we got to see an incredible recreation of it!  The set is an all-dark stage with giant circle spotlights to highlight “Peter Gabriel” at his most extreme in costume and improvisation and done beautifully and faithfully by Denis Gagné who completely throws himself into the part, studying every nuance of Peter Gabriel’s performance.  He even learned to play flute for the part as testimony to the dedication!

All the musicians are so studied in their parts and great musicians in their own right. François Gagnon as Steve Hackett did quite an impressive job with his guitar work and it is no small feat to play such intricate pieces.  He appears to be a classically-trained guitarist and having seen Steve Hackett’s Genesis Revisited tour just this past February at the same theater, I had a lot to compare him to with many of the same tunes still fresh in my mind. 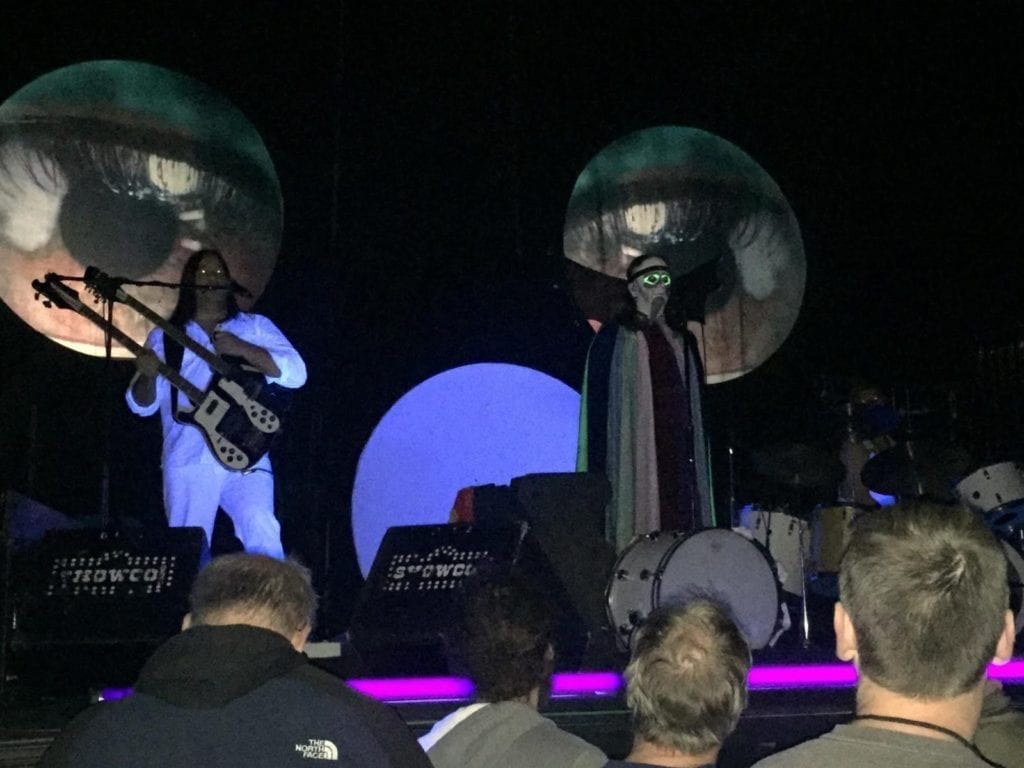 Guillaume Rivard as Tony Banks on keyboards, 12-string guitar and vocals rounded out the strings. He too, was often on guitar. In fact, there were periods of three 12-string guitars playing at once on stage.

Marc Laflamme is their Phil Collins at ease with the energy and fluidity of Phil’s playing.  He even had the Phil look down in overalls and shaggy hair! This band is so tight they are seamless.

It’s hard not to gush that you really feel like you are seeing the original band in 1974, but that is definitely the feeling that they are trying to recreate and doing so successfully, I might add. Close your eyes and you hear Genesis. Of course, you need them open to take in the performance, which you do not want to miss. It’s a dark set but that does not mean stagnant.

The show kicked off with “Watcher of the Skies” from the Foxtrot album.  Denis emerged in cape, bat wings with shaved head, and fluorescent makeup conjuring up ethereal intensity.  When those first sweeping notes hit, you know you’re in for something special.  The vocals are spot-on, as is the music, with Denis channeling Peter gliding about the stage eerily.

“Watcher of the Skies” slid straight into “Dancing with the Moonlit Knight,” from the 1973 album, Selling England by the Pound, which was indeed a treat. Gagné, complete in Union Jack attire, stood stoically onstage, the a capella first words of the song ringing out before the band joined in. “Peter” prowled about the stage, changing costumes to each song, the flower head in “Supper’s Ready,” an old man mask for “The Musical Box,” spectral strobe lights glinting off a silver sequined suit. The rest of the set list included “The Cinema Show,” “I Know What I Like,” “Firth of Fifth” (a personal fave), the aforementioned “The Musical Box,” “Horizons,” “The Battle of Epping Forest,” “Supper’s Ready,” and an encore of “The Knife.”

The audience was entranced. When you attend a lot of prog shows in the city, you start to recognize faces in the crowd. My particular favorites were a dad and son whom I had also seen at Steve Hackett’s show in the exact same seats, bobbing along together singing their hearts out. It’s so fun and inspiring to see a younger crowd so enthusiastic about this timeless music and The Musical Box is proof positive that the audience is still there and still craving this music.