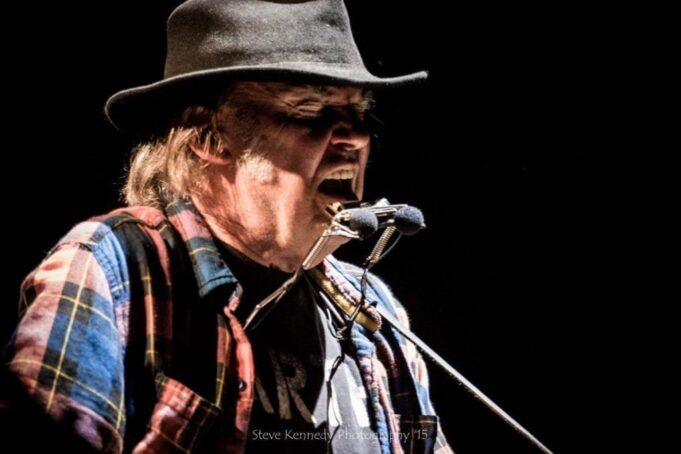 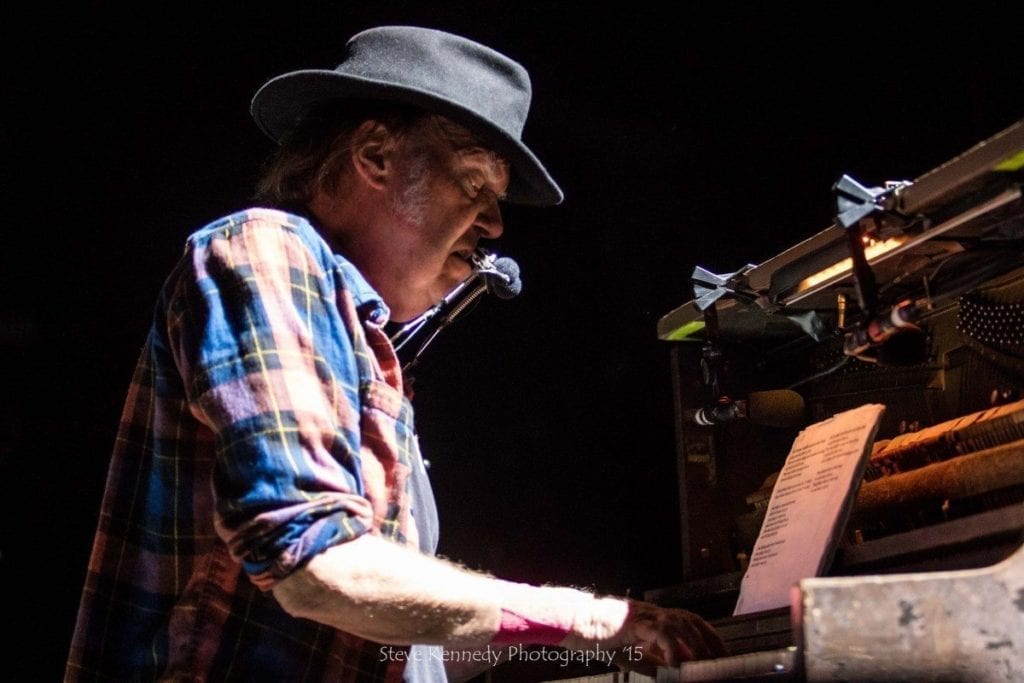 by Steve Kennedy  (Words and Photos)

Check out the full gallery of photos in an album on our Facebook page.

Submit your review or story to us at [email protected]

Neil Young and The Promise of the Real unleashed a dynamic rock-n-roll show at the Santa Barbara Bowl. In a show that spanned over 3 hours, crushing the artist cutoff deadline at the Bowl by over 30 minutes, Neil planted a flag in protest against Monsanto. The venerable sixties protest singer has set his sights on corporate giants and genetically modified food manufacturers.

From the video channel of Fer Felix Redes

The show started over an hour late, giving the sold out, jam-packed crowd time to gather energy in anticipation of one of the years most hyped performances. Without much ado Neil came from back stage and took a seat at the piano and began to sing “After the Gold Rush”. 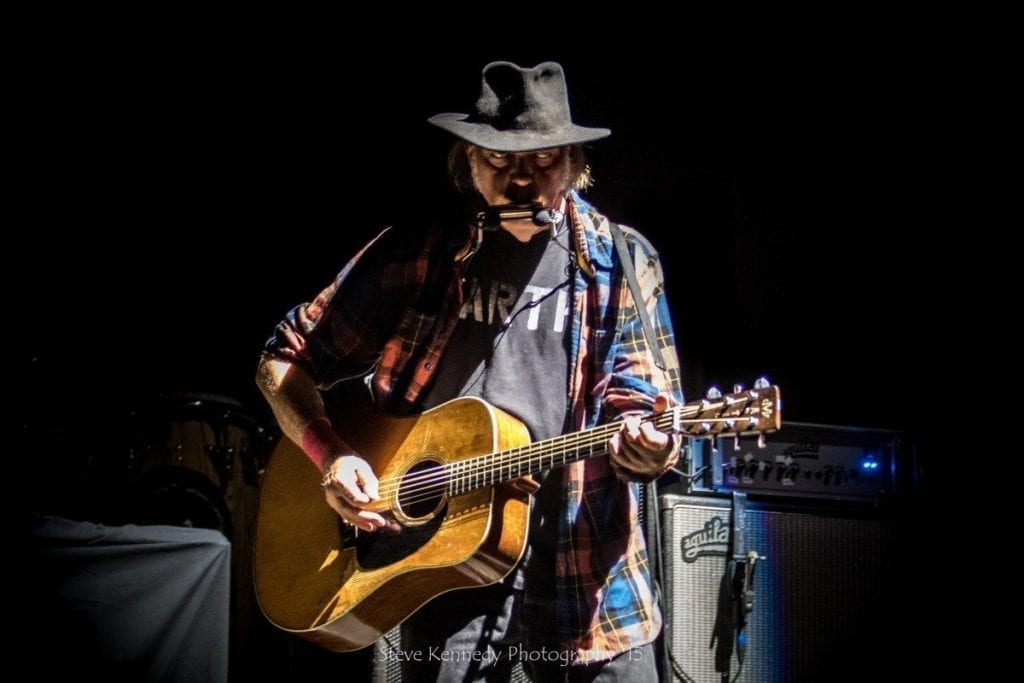 “Look at Mother Nature on the run in the 21st century”, lyrics fitting to the theme of the night. Wearing a black flat brimmed hat, red flannel blue jeans and a black t-shirt with EARTH scrolled on the front, he then picked up his trusty acoustic guitar and broke into “My My Hey Hey”, singing “Rock-n-roll will never die”.

With the skill of a well-crafted folk singer he took the reins to “Helpless” guiding the audience through the tender peaks and valleys of the folk ballad highlighted with harmonica melodies.

After the solo acoustic intro he was joined onstage by The Promise of the Real. Promise of the Real features Willie Nelson’s son Lucas Nelson (for more information see J. Moiles interview). In true Neil form, the show began to pick up steam. “She rides a Harley Davidson, her long blonde hair flies in the wind.” The hot Santa Barbra night seemed to simmer with the smoldering lyrics. One of the many highlights of the night was Lucas Nelson covering “September Song”. The beautiful ballad showcased Lucas Nelson’s uncanny vocal impersonation of his father, Willie. Willie was in the house backstage making the version even that much more special.

“The Monsanto Years” is Neil Young’s 36th studio album and is a scathing indictment of Monsanto’s agribusiness takeover. Neil’s distain for the corporate giant is palpable and is orchestrated with heavy handed riffs and mouthy taunting. He challenged authorities to arrest him for spreading non-genetically modified seeds that have been transported outside of their 3 mile perimeter. Neil’s protest songs from the album included “Big Box”, “People Want to Hear About Love” and “A Rock Star Bucks a Coffee Shop”, singing “I want a cup of coffee but not GMO”. 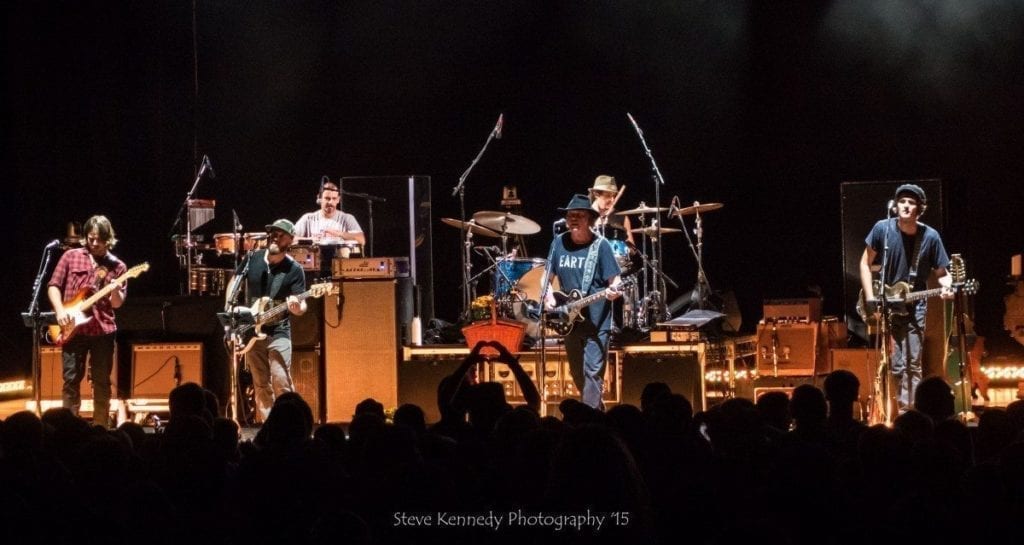 “Free the American farmer folks” Neil proclaimed, “The family seeds they used to say were gifts from God but not Monsanto.” The show climaxed into a straight hard rocking free for all, with members of the band head banging and climbing on the drum risers.

As the band rocked on, the crowd began to realize the strict Santa Barbara Bowl 10pm curfew was being obliterated. Rumor quickly spread that it was costing the band as much as $10,000 per minute. If the $350,000 price tag were true it would be some of the most expensive music played in years. If you want attention, challenge authorities to arrest you, blow off local curfews and protest monstrous corporate companies with an iron fist in the air. Ever the curmudgeon, Neil Young checked all the boxes of Protest Singer, including flat our jamming with kids half his age. Neil Young may not play the Bowl again but he left the thrilled crowd with a buzz they will not soon forget.

From the video channel of Fer Felix Redes

Check out the full gallery of photos in an album on our Facebook page.

Submit your review or story to us at [email protected]