When John Kadlecik contacted Jeff Chimenti, Jay Lane, and Reed Mathis asking them to sit in on his electro-acoustic solo show at Terrapin Crossroads back on November 5th, little did he or the fans in the audience realize that they were witnessing the birth of a band – Golden Gate Wingmen.   As described in a fan review previously published on Live Music News and Review, with very little previous playing time together, these guys jelled instantly on stage as they launched into their first song in the second set, Bob Dylan’s When I Paint My Masterpiece.

Check out the review of John Kadlecik and the DC Mystery Cats January 9 show here. 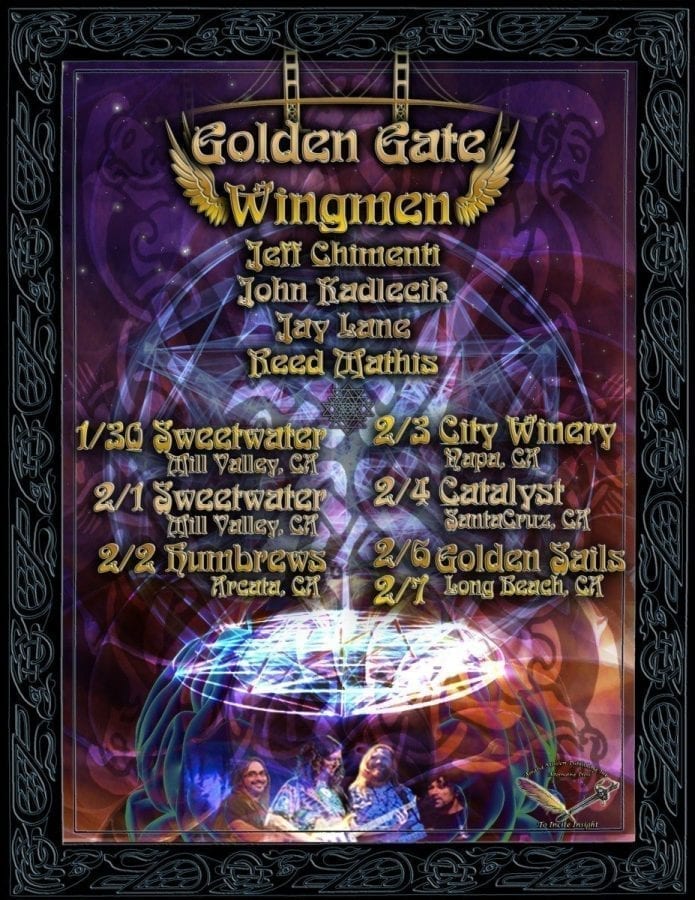 The rest of the show was music magic as they played tunes familiar to the crowd, such as the Grateful Dead’s Dupree’s Diamond Blues and the Police’s Walking in Your Footsteps, interspersed with some of John K.’s original work like Liquid Silver and Desert Trance.  The Golden Gate Wingmen played the show as if they had been on the road with each other for years and did not disappoint the audience.

Check out the article on the new tour dates released by Jack Grace, solo tour of the West coast on tap.

Shortly before this show Furthur decided to go on an extended hiatus, perhaps permanently, leaving fans wondering “What’s next?”  The Golden Gate Wingmen is the answer.   John Kadlecik the guitarist, is best known as a founding member of Dark Star Orchestra and lead guitar player for Furthur, Phil Lesh and Friends, and leader of his own outfits, John K. Band and the DC Mystery Cats.   Jeff Chimenti, the keyboardist, is a member of RatDog and a former member of The Dead and Furthur.  Chimenti is also listed as the keys man for the upcoming three night Fare Thee Well shows in Chicago that mark the alleged final performance of the core 4 Grateful Dead members.

Click here to read the review of the band’s debut show.

Jay Lane, the drummer, is a member of RatDog, Scaring the Children with Bob Weir and Rob Wasserman, Alphabet Soup, and a former member of Primus and Furthur.  Reed Mathis, the bass player, is a member of Tea Leaf Green and has played with Jacob Fred’s Jazz Odyssey .   The name Golden Gate Wingmen is a nod to the San Francisco area where much of the music these guys grew up on originated and as it relates to this line up, a Wingman in musical terms means that these guys are musicians who have made careers as members of bands with perhaps slightly more famous members but whose talents are well known in their own right.

These guys know how to jam.  Their sound is familiar and accessible, playing a mix of tunes ranging from Grateful Dead standards, Americana traditionals, as well as John Kadlecik originals many from his recently debuted 4 song CD, Liquid Silver Live.  This album offers fans of improv-jam music a taste of real artistry.  These songs, written with lyrics by Indi Riverflow and music by John, include The Great Wheel, River Run, Liquid Silver, and Desert Trance.  The last song Desert Trance also features a musical co-writing credit to Bob Weir of the Grateful Dead, Furthur, and RatDog.

Check out the review written by Keith Gaskin of the Fall 2014 String Cheese Incident show in Pt Chester, NY.

Since their first show, the Golden Gate Wingmen have played a successful two show run at Quixote’s True Blue in Denver on Dec. 30th and 31st and decided to keep the momentum rolling by announcing a short, but definitely sweet, tour in central California.

If you are anywhere on the West Coast, or west of the Rockies for that matter, then you’ll want to save these dates.  First stop, Sweetwater Music Hall in Mill Valley on Friday Jan. 30th and (if you don’t have plans for the Super Bowl) Sunday Feb. 1st.  Then it’s on to Arcata where they will play Humboldt Brews on Monday Feb. 2nd.  They’ll be stopping at the City Winery in Napa to play Tuesday Feb. 3rd and The Catalyst in Santa Cruz on Wednesday Feb. 4th.  Then the Golden Gate Wingmen will end the tour with a final stop in Long Beach for two shows at Golden Sails with local Dead tribute band, Cubenis opening on Friday and Saturday Feb. 6th and 7th.  Hurry though, tickets for these last two shows are going fast!

Gas up the car, make your hotel reservations, and head out the door for a good old-fashioned road trip, because you’re not going to want to miss these guys.  Who knows when they’ll be out again playing at a club near you.

Check out the article on the new tour dates released by Jack Grace, solo tour of the West coast on tap.

Click here to read the review of the band’s debut show.

Check out the review of John Kadlecik and the DC Mystery Cats January 9 show here.

Check out the review written by Keith Gaskin of the Fall 2014 String Cheese Incident show in Pt Chester, NY.