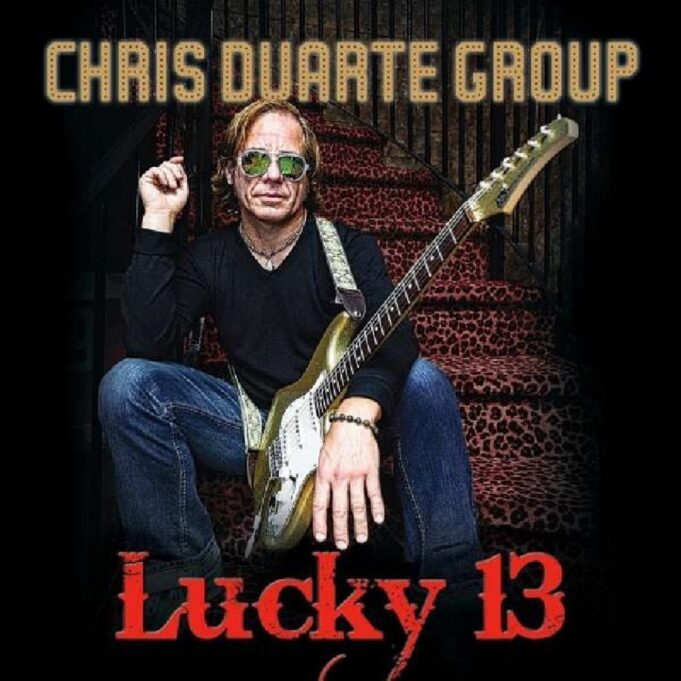 Disclaimer:  While the parent company of this website is a music agency handling artists, Chris Duarte is not one of them.

Chris Duarte Group is set to release the new album “Lucky 13” on Blues Bureau International October 14, 2014.  Chris Duarte Group emerged on the scene out of Austin, Texas, in the early 90’s and gained notoriety after wowing a packed room of industry insiders at the South X Southwest convention. In the wake of Stevie Ray Vaughan’s passing, Duarte quickly gained a national reputation as a young man imbued with a playing style comparable at times to the late guitarist.

Check out the review of the September show by legendary band King Crimson.

After fielding interest from a number of labels, Duarte signed to Silvertone Records and his debut album “Texas Sugar/ Strat Magik” reportedly sold in excess of 100,000 units in the United States, no small feat for a blues/rock guitarist. This coupled with Duarte’s strong commitment to touring, was the impetus for Chris’ winning the “Best New Talent” in Guitar Player’s 1995 Reader’s Poll. He also finished fourth in the magazine’s “Best Blues Guitarist” category that year behind legends Eric

Throughout the last decade, Duarte honed his chops as a guitarist, songwriter, and singer as he recorded three more critically acclaimed records, “Tailspin Headwhack” in 1997, “Love Is Greater Than Me” in 2000 and “Romp” 2003, the latter two of which were on the Zoe/Rounder label.

Check out the review of the Allman Brothers Band at Peach Festival in August when they performed all of Eat a Peach.

Not one to rest on his laurels, Duarte has constantly worked on his growth as a musician and the years of recording culminated purposefully in this past decade’s “Blue Velocity”, “Vantage Point”, “396” with Bluestone Company, “Blues In The Afterburner”, “Something Old, Something New, Something Borrowed, All Things Blue”, “Infinite Energy”, “My Soul Alone”, and 2013’s “Chris Duarte Group Live”. All records aptly showcase many sides of this brilliant artist in the context of high energy blues rock with moments that bring to mind legendary artists as diverse as Stevie Ray Vaughan, Robin Trower, Jimi Hendrix, and Eric Johnson.

Check out the article on the passing of guitar legend Johnny Winter.

further established Duarte as one of the rare musical talents of his generation. “Lucky 13” continues in the tradition of contemporary blues rock with bursts of fusion, pop, and heavy psychedelia throughout. This CD contains a heavy dose of Duarte’s legendary blues guitar chops over a diverse set of grooves and lyrical themes.

The Blues Bureau label has developed a strong following for its superior blues rock recordings. Chris Duarte takes his place among artists in the label’s legacy that includes such blues rock legends as Rick Derringer, Pat Travers, Eric Gales, and Leslie West.  As a guitarist, Duarte has been compared to some of the greatest players of all time. This record, while featuring some of his most impressive and extended guitar work to date, also reveals him to be a strong singer/ songwriter in the blues rock genre.  Chris’ masterful guitar and vocal performances on “Lucky 13” portend a great response from these loyal blues fans, as guitarists of this quality and intensity are few and far between.

The Chris Duarte Group is a perennial touring act, and have played as many as 300 dates in a single year, and has developed a legion of loyal fans spanning across the United States.  Below are the upcoming tour dates recently announced.

Fans of progressive music will love the band Consider the Source.  Check out our 2010 band spotlight.

Disclaimer:  While the parent company of this website is a music agency handling artists, Chris Duarte is not one of them..