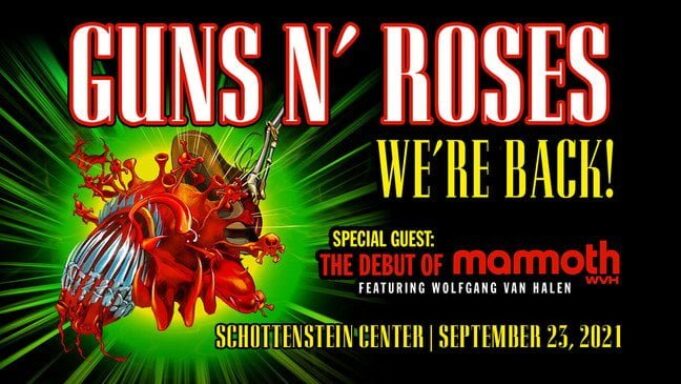 Last Spring, I saw that Guns N Roses were going to play my Hometown the day after my Birthday, so the first thing I did was go online and buy a Ticket.  After all, Axl, Duff, and Slash had gotten back together and I was eager to see this band for the first time.  I grew up listening to them and learning their songs on guitar, so they have always been heroes of mine.

Fast forward three months later and my excitement to see a show after a global pandemic was thirsty as hell.  The days before the concert I was walking my entire block, listening to music and getting pumped up about the show.   Last night I got in my car and headed to the Schott to see one of the best Concerts I have Ever witnessed.

I arrived in time to see Mammoth’s (Wolfgang Van Halen) last song and I really liked it.

Setlist:
Don’t Back Down
Mammoth
Mr. Ed
Think It Over
You’re to Blame
Distance
Epiphany (preceded by band introductions)

When GnR took the stage, the place shook with excitement and cheers.  Axl looked great with his shorter hair and slim physique having returned.  Slash and Duff were both muscular and tan.  I wondered, what took them so long to get it back together and fire up the machine?  The new drummer was phenomenal, and the keyboardist, pianist, and rhythm guitarist were all super pros.

First song was It’s So Easy, then Mr. Brownstone.  Axl was all over the stage getting the crowd riled up, and Slash was moving alot as well.  Slash had three Wah pedals placed strategically throughout the front of the stage, and he used them extremely well.  Axl’s voice was very clear considering he was a longtime smoker and has spent the last three decades or more on the road.

The band looked and sounded hyped to be playing our town, and the crowd was super into it.  This was one of my first hard rock shows, and I thoroughly enjoyed the energy, so much so that I’m still awake writing this review at six in the morning.

Welcome to the Jungle was a highlight of the show, and Axl can scream, still.  Live and Let Die was next and was awesome; you could feel the coming from emotion from the band.  Behind the band was a giant LED Screen that had animation going during each song.  To top it off, they had enough moving lights to compete with Phish.  Either side of the stage had Led screens that would zoom in on the performers, so it was a very high tech and well played show.  I have no idea how many shows into the tour they were, but they were tight in every way.  One of my other faves was You Could Be Mine, in which Slash busted out a red trapezoid shaped guitar that really blew my mind, and it looked newer than his standard Les Paul guitars.

For me, Slash was the highlight of the show.  As a Gibson player, I appreciate the art he makes with his solos.  They are so creative and heartfelt, he puts a lot of energy behind each note, and I learned a few tricks from him last night on the Les Paul.  Sweet Child of Mine was amazing, and it was after one of Slash’s guitar solos.  He played the sh$t out of a Gold Top during the solo and didn’t even need to tune it to start the opening riff.

November Rain showcased Axl on piano, singing and playing to the classic video playing up on the screen.  Duff even took the mic at one point during the show to play I Wanna be Your Dog (Iggy Pop), and it rocked.

I was really revved up at this show, and I can’t wait to see the next one.  It was a full on adrenaline rush for three hours.  The guys are in great shape, and I hope you get a chance to check them out yourself.