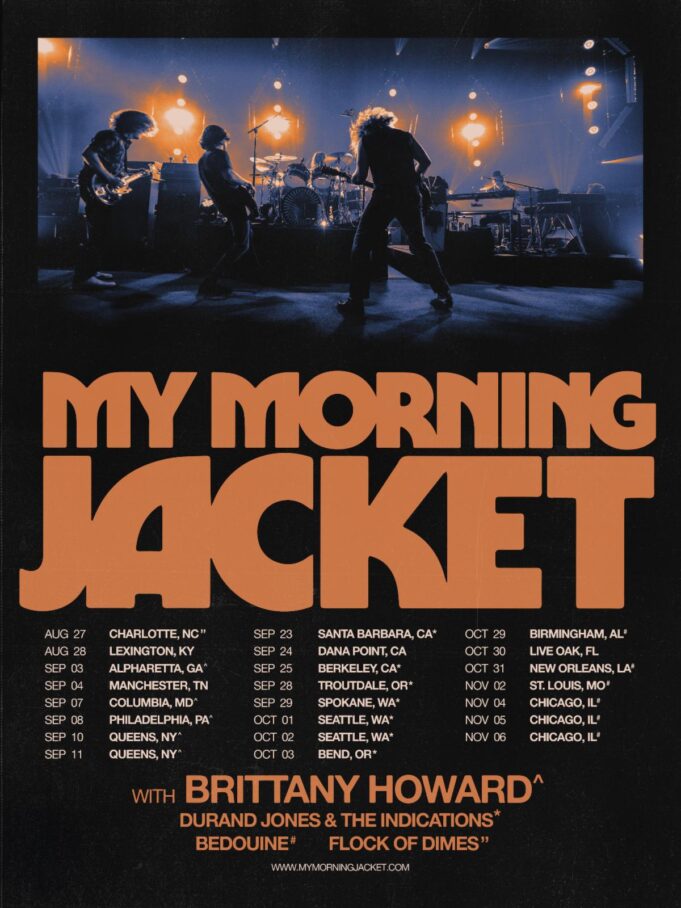 My Morning Jacket have unveiled plans for their first US headline tour in five years. The dates begin August 27 at Charlotte, NC’s Metro Credit Union Amphitheatre, and then travel through a three-night-stand at Chicago, IL’s Auditorium Theater on November 4, 5, and 6. Additional highlights include multi-night-stands at Queens, NY’s Forest Hills Stadium (September 10-11) and Seattle, WA’s Paramount Theater (October 1-2). Special guests throughout the tour will include Flock Of Dimes (August 27), Brittany Howard (September 3-11), Durand Jones & The Indications (September 23-October 3), and Bedouine (October 29-November 6).

In partnership with PLUS1, $1/ticket will go to support non-profits working for environmental justice, racial equity, and securing access to mental health care for all.

Hailed by the New York Times as “the new kings of expand-your-mind, religious-experience rock,” My Morning Jacket has released eight studio albums, with 2008’s EVIL URGES, 2011’s CIRCUITAL, and 2015’s THE WATERFALL each receiving GRAMMY® Award nominations for “Best Alternative Album.” In summer 2020, the band surprise-released THE WATERFALL II and the album was met by worldwide critical acclaim. Pitchfork declared, “If its predecessor was about conflict and healing – it’s My Morning Jacket’s thorniest album, emotionally speaking – then this follow-up is more about what comes after that healing,” while the Wall Street Journal called it “an epic meditation on desire.” “Despite its sequel-style title, The Waterfall II stands as an equal to its well-loved predecessor,” wrote Consequence, “one that moves from the sunny banks at the top of the falls to the deep and bracing waters down below.” Uncut called the album “sweetly sprawling,” noting that it includes epic Crazy Horse jams, beautiful low-key ballads, a spot of soft jazz, country, and a soul number…tied together by Jim James’ consistently terrific vocals and the ever-present threat of sustained reverb.” My Morning Jacket made band history at radio with THE WATERFALL II’s single, “Feel You,” which reached #1 on the Billboard, Mediabase, and Triple-A charts.

MY MORNING JACKET US TOUR 2021