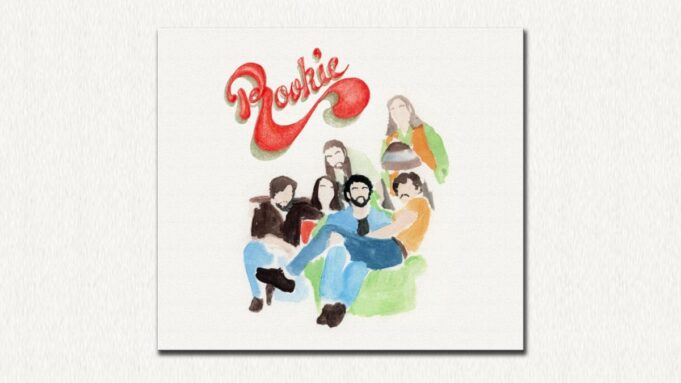 Following the announcement of their eponymously titled debut LP, Chicago rock outfit ROOKIE have released their second single, “Hold On Tight,” a face-melting dose of electric guitars now available on all streaming platforms. The song is aptly titled as it bashes down the door with a deceptively simple AC-to-the-DC riff that evolves into a three-headed guitar monster attack that takes the standby arena rock formula to wild new places.

ROOKIE is six matching jumpsuit-clad, shaggy-haired friends from Chicago who play rock ’n’ roll that’s more at home next to their parents’ battered LPs than on their friends’ streaming playlists. Their self-titled, debut full-length album — out on March 13 and available to pre-order now — deftly reformats the classic rock landscape with blowtorch hooks, enthralling harmonies, evocative touches of cosmic country, and distinctively indie-minded songwriting.

In addition to “Hold On Tight,” American Songwriter recently premiered the video for the band’s debut single “Sunglasses,” featuring guitarist Chris Devlin’s and his wife’s dog grooming business and some of their furry clients.

ROOKIE’s modern take on timeless American rock ‘n’ roll pulls from all corners of the sonic map; it’s familiar but fresh, lived-in but blown-out. It’s the ‘70s/’80s pop-rock sheen of Cheap Trick, three-minute precision songwriting of Big Star, loose Neil Young Americana, and hazy, psych-flavored boogie of the Allman Brothers and Thin Lizzy. Though barely able to comfortably fit on most stages, once they’re plugged in and smooshed together it’s a potent blend of power chords, blistering leads, and performance prowess beyond their years.

The band have confirmed a number of live dates through May, including shows with Twin Peaks, Coathangers, festival appearances, a hometown album-release blowout at Empty Bottle on March 13, and several dates supporting Brendan Benson of The Raconteurs.

Drop us a line at [email protected] with your live music news and show review.