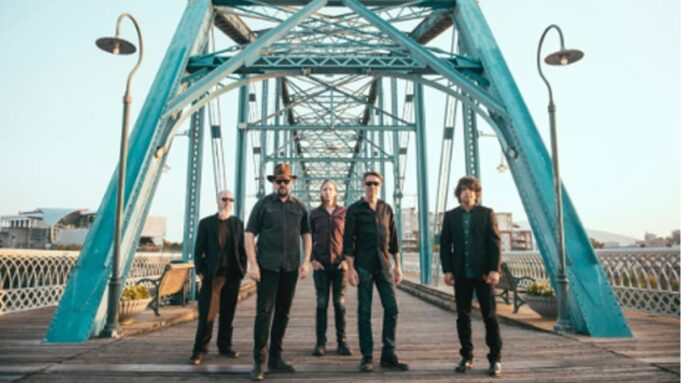 Drive-By Truckers have unveiled the latest single from their much-anticipated new album, THE UNRAVELING. “Thoughts and Prayers” is available for streaming and download now following today’s exclusive world premiere via Billboard. The powerhouse track is joined by an official lyric video streaming now. THE UNRAVELING arrives via ATO Records on Friday, January 31; digital and physical pre-orders are now available.

THE UNRAVELING was first heralded late last year by the bracing first single, “Armageddon’s Coming To Town,” available now for streaming and download. The track is joined by an official lyric video streaming now. “Armageddon’s Coming To Town” was met by critical applause upon its November 2019 premiere, with Rolling Stone writing, “Drive-By Truckers stare down the end of the world on their new song,” noting that the “ramshackle rocker…finds co-frontman Patterson Hood grappling with a deluge of confusion, dismay, uncertainty and guilt as he sings, ‘There’ll be no healing from the art of double dealing/Armageddon’s back in town again.’” Stereogum hailed “Armageddon’s Back In Town” as “a revved-up, world-weary rocker about dealing with the day-to-day hassles of traveling the United States while feeling like things are at a breaking point,” adding, “If 2016’s AMERICAN BAND focused on the declining state of the country, then THE UNRAVELING looks to get even deeper into an even more fucked-up state of affairs.”

Drive-By Truckers’ 12th studio album and first new LP in more than three years – the longest-ever gap between new DBT albums – THE UNRAVELING was recorded at the legendary Sam Phillips Recording Service in Memphis, TN by GRAMMY® Award-winning engineer Matt Ross-Spang (Jason Isbell, Margo Price) and longtime DBT producer David Barbe. Co-founding singer/songwriter/guitarists Mike Cooley and Patterson Hood both spent much of the time prior doing battle with deep pools of writer’s block. “How do you put these day to day things we’re all living through into the form of a song that we (much less anybody else) would ever want to listen to?” says Hood. “How do you write about the daily absurdities when you can’t even wrap your head around them in the first place? I think our response was to focus at the core emotional level. More heart and less cerebral perhaps.”

The songs that eventually emerged are among Drive-By Truckers’ most direct and pointedly provocative, tackling the myriad horrors of our new normal through sincere emotion and unbridled heart. Indeed, “Armageddon’s Back in Town” takes a whirlwind joyride through the whiplash of events we collectively deal with each day while the concluding “Awaiting Resurrection” dives headfirst into the despair and pain roiled up by these troubled times.

“The past three-and-a-half years were among the most tumultuous our country has ever seen,” says Hood, “and the duality between the generally positive state of affairs within our band while watching so many things we care about being decimated and destroyed all around us informed the writing of this album to the core.

“While a quick glance might imply that we’re picking up where 2016’s AMERICAN BAND album left off, the differences are as telling as the similarities. If the last one was a warning shot hinting at a coming storm, this one was written in the wreckage and aftermath. I’ve always said that all of our records are political but I’ve also said that ‘politics is personal’. With that in mind, this album is especially personal.”

The remarkable songcraft found on THE UNRAVELING receives much of its musical muscle from the sheer strength of the current Drive-By Truckers line-up, with Hood and Cooley joined by bassist Matt Patton, keyboardist/multi-instrumentalist Jay Gonzalez, and drummer Brad Morgan – together, the longest-lasting iteration in the band’s almost 25-year history. The LP also features a number of special guests, including The Shins’ Patti King, violinist/string arranger Kyleen King (Brandi Carlile), and North Mississippi All-Stars’ Cody Dickinson, who contributes electric washboard to the strikingly direct “Babies In Cages.”

Hailed by Stereogum as “perhaps the greatest extant American rock and roll band,” Drive-By Truckers will mark THE UNRAVELING with an epic world tour, getting underway this Thursday, January 16, at Boulder, CO’s Fox Theater and then continuing through late June. Highlights include a number of eagerly awaited two-night-stands across the US, international festival performances, and the annual HeAthen’s Homecoming, a sold out three-night extravaganza marking the 26th anniversary of Patterson Hood’s first visit to Athens, GA’s world famous 40 Watt Club (February 13-15). In addition, Hood and Cooley will visit Brooklyn, NY’s Rough Trade NYC for an exclusive acoustic performance, signing, and Q&A with renowned rock journalist David Fricke, set for Saturday, February 1 at 2:00 pm – entry is available only with advance purchase of THE UNRAVELING via Rough Trade NYC. For updates and ticket information, please visit the official Drive-By Truckers tour page.