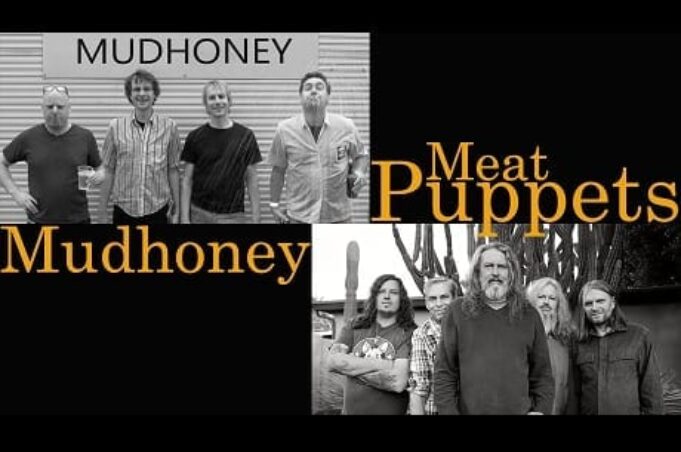 Meat Puppets’ original lineup, Curt and Cris Kirkwood and drummer Derrick Bostrom, will be joining Mudhoney this spring for a co-headlining US tour in support of their latest album, Dusty Notes (Megaforce). In 2019, Mudhoney released the album, Morning in America. Dates are below, with more on the way. Tickets are on sale now.

The Puppets’ story begins with three kids, enamored of music and immersed in the psychedelic drug culture of Arizona in the ’70s, who find their way to punk rock and painstakingly become one of the most important bands of the American underground. “We began to make such a hellacious racket that we knew we were on to something,” says Derrick Bostrom, who rejoined the band in 2018.

“The band has been a really, really deep font of creativity,” Derrick said. “Love it or hate it, hit or miss, Curt is just prodigious. They are still living the rock lifestyle; they’re not doing it by half measures. They stayed on the road. These guys are uncompromising. I consider the Meat Puppets to be a national treasure.”

Mudhoney were the first real success story for Sub Pop Records; their music laid the groundwork for the movement that would (briefly) make Seattle, Washington, the new capital of the rock & roll universe. They took the sweat-soaked and beer-fueled mixture of heavy metal muscle, punk attitude, and garage rock primitivism that would become known as “grunge” to the hipster audience for the first time with early releases like 1988’s Superfuzz Bigmuff and 1989’s Mudhoney, and those fans would in turn sell it to a mass audience ready for something new.

Mudhoney never scored the big payday some of their old running buddies did, though they did land a major-label deal that produced several strong albums, especially 1995’s My Brother the Cow and 1998’s Tomorrow Hit Today. Their importance on the Seattle scene cannot be underestimated, and their body of work — big, loud, purposefully sloppy, a little bit menacing, and even more funny — has stood the test of time better than their well-known colleagues. And they continued to produce strong, relevant music into their third decade on 2013’s Vanishing Point and 2018’s Digital Garbage.

Drop us a line at [email protected] to submit your live music story or review.