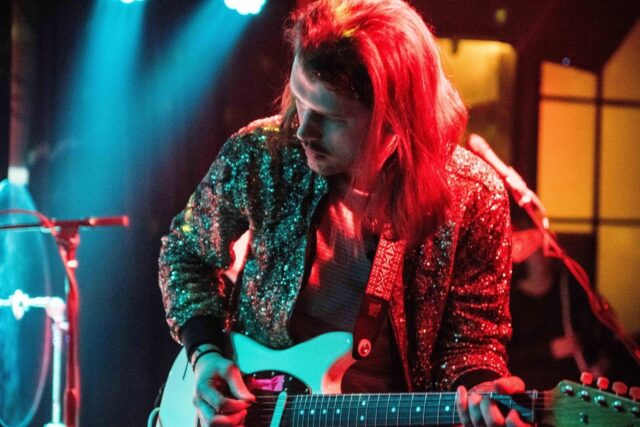 Mike Mains & The Branches played an energetic 65-minute set at Coney Island Baby in New York on Friday night.  The Detroit, Michigan band consists of husband and wife Mike and Shannon Mains.  Mike on guitar and lead vocals, Shannon on vocals, keys, mandolin and saxophone.  Another husband and wife team are on drums and bass.  Robbie Barnett on drums and his wife Allison on bass and vocals.  Rounding out The Branches is Alex Hirlinger on guitar and vocals.

Known for their catchy, free-associating, indie pop-rock melodies, Mike Mains & The Branches invites diverse comparisons to acts such as Foster The People, Young the Giant, The Killers, and Arcade Fire.

The boisterous crowd at Coney Island Baby made up for the dearth of fans at the venue.  These diehards knew every word to every song, even to songs that haven’t been released yet.  Mike Mains & The Branches new album When We Were In Love is due to be released on April 5.  These loyal fans are endeared to Mike’s introspective lyrics and spry stage energy, Shannon’s keyboards and supporting vocals.

Mike Mains & The Branches will be on tour throughout April.

Back To Your Heart

Letters to Cleo by Mark Ashe