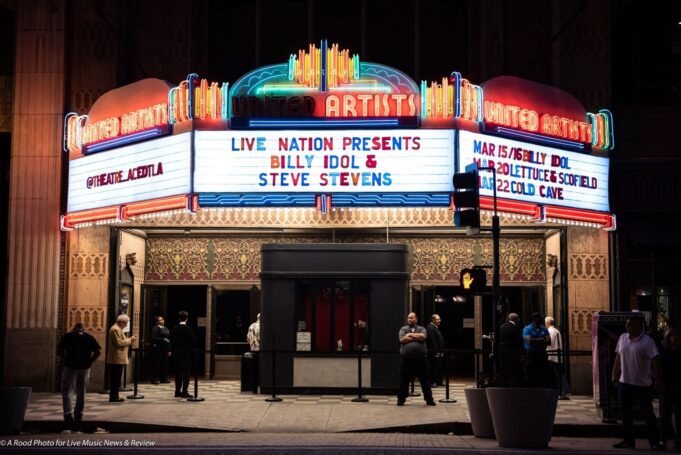 Photos by Stevo Rood and words by Michelle Nati

Billy Idol and Steve Stevens played back to back, acoustic shows at Theatre at Ace Hotel in Downtown Los Angeles last weekend as part off their tour of the US and Canada, which ends its run in Red Bank, NJ on April 4.

The set featured many of Idol’s greatest hits as well as a few surprises, each of which was set up with a story detailing different points in his career and life, from the early days of punk to solo superstardom and beyond. Before  “Ghosts in My Guitar,” from his 2014 album Kings & Queens of the Underground, Idol told the touching story of how his father came to love his music and was listening to this particular songs as he passed.

Idol also shared heartwarming stories of his early days in as a London punk, moving to New York to launch his solo career and coming up with the idea for “Rebel Yell” at a party attended by none other than the Stones, who he had hoped wouldn’t steal the title. However, his most important tale and the one shaped his solo career is that of meeting Steve Stevens (who has his own interesting backstory—he went to the  School of Performing Arts in New York, otherwise known as the “Fame” school) after an introduction by then manager Bill Aucoin. As he tells it, Stevens had always wanted to be part of Jagger/Richards, Tyler/Perry-type duo and he found his musical soulmate in Idol who was looking for much the same thing.

Idol and Stevens played hits that spanned four decades including “Eyes Without A Face,” “Dancing With Myself,” “To Be a Lover, “Catch My Fall,” and the Generation X classic, “Kiss Me Deadly.” Before leaving the stage for the night, Idol and Stevens had the crowd on their feet with “White Wedding” and the Johnny Kidd & the Pirates’ “Shakin’ All Over,” which was the closing song. Can every show be this wonderful?

Set List:
Dancing With Myself
Catch My Fall
Twenty Flight Rock (Eddie Cochran cover)
Kiss Me Deadly
I’m Not Like Everybody Else (Kinks cover)
Sweet Sixteen
Ghost in My Guitar
Eyes Without a Face
Steve Steven’s Acoustic Guitar Solo
Don’t Need a Gun
To Be a Lover (William Bell cover)
Rebel Yell

Encore:
White Wedding
Shakin’ All Over (Johnny Kidd and The Pirates cover)