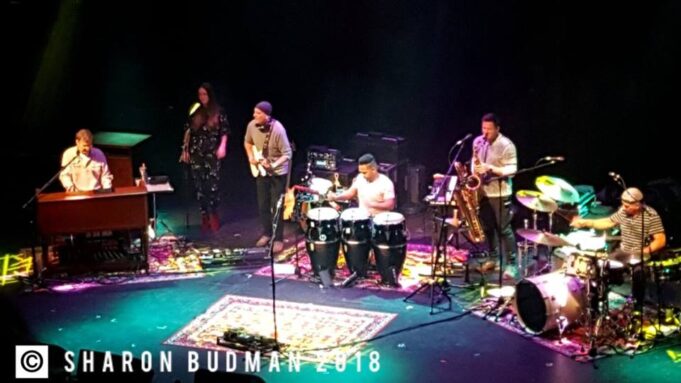 Two time Grammy award winner and Rock and Roll Hall of Famer, Steve Winwood, co-headlined night one of the Phil Lesh 78th Birthday run at The Capitol Theater in Port Chester, NY.  Winwood, currently 69 years old (you’d never know it) began his musical career in the 60’s and through the years was a member of various musical groups including the Spencer Davis Band, Traffic and Blind Faith. Tonight, Winwood was performing with his 5 piece band and was accompanied by his daughter, Lilly, on back-up vocals for several songs.  The extremely talented (and I mean extremely) members of this rockin’ band included multi-instrumentalist Paul Booth on Flute, Saxophone and Keys, Guitarist Jose Neto, Percussionist, Edwin Sanz, and Richard Bailey on Drums.  You may even recognize the name  Paul Booth as he has played, not only with Steve Winwood but also with Eric Clapton, Carlos Santana, Chaka Khan, Donald Fagen, Derek Trucks, Joe Bonamassa, and Bonnie Raitt just to name a few.

The band casually took the stage at 8:05 p.m. busting into   “I’m A Man,” (a Spencer Davis Group tune) and they were off the charts literally right out of the gate. The crowd was on its feet. Winwood then graciously took a moment to wish his co-headliner and friend Phil Lesh a very happy birthday and then was right back on task delivering an outstanding performance song after song.  His current tour, entitled, “Greatest Hits Live” was exactly that. He told this sold out crowd he would be taking us through the decades of the 60’s and beyond and he was true to his word. What better than a show where the attendees can relate to the music, and sing and dance along.  That’s undoubtedly a recipe for a happy crowd. From the video channel of Sean Roche:

As he took us through the years, performing selected tunes from his multiple bands and catalog, we got to experience the best of these musicians.   The solo performances on drums, percussion, electric guitar, saxophone, Hammond B3, flute, etc. were nothing short of spectacular.  It appeared that Winwood’s voice has not aged nor has his ability to perform.  If you closed your eyes and just listened, you would have thought you were back in time. Winwood was magical on that Hammond B3 and also killed it on the electric and acoustic guitars. So much talent!

Towards the end of the set, he brought out his 22 year old daughter Lilly Winwood, to “take us into the 80’s” and closed out the set. She accompanied her dad on back-up vocals. What a treat that was; the apple doesn’t fall far from the tree. Those who attended Steve Winwood the prior night at the Capitol Theater (March 13, 2018) got to see Lilly perform as the opening act.  Lilly, is currently touring with her dad and is a musician in her own right, just releasing her first EP, recorded in Nashville, TN, where she was born and currently lives. The spirited crowd was absolutely loving it and on its feet. The band briefly exited the stage. Then Winwood, Lilly, and Paul returned to the stage to kick off what would be a three song encore beginning with the English folk song “John Barleycorn (Must Die.)”

The attendees were really loving it and even got sort of quiet (for the Cap anyway). After, both Edwin (percussion) and Richard (drums) then returned to the stage for “Mr. Fantasy” as the crowd joined in… followed by “Gimme Some Lovin,”  which had everyone dancin’ and singing along. The energy was insane and the evening was nothing short of fantastic.  The crowd, in my opinion, truly enjoyed the musical journey through time.

Winwood just wrapped up his current US tour on March 15 in Bethlehem, PA.  He currently has 2 upcoming dates in Europe in June as part of the Music Legends Festival in Spain, and in July in Hyde Park, London, UK with a line-up that includes Eric Clapton, Santana, and Gary Clark Jr. at the Barclaycard British Summer Time 2018 event.

From the video channel of MarcGlenRock