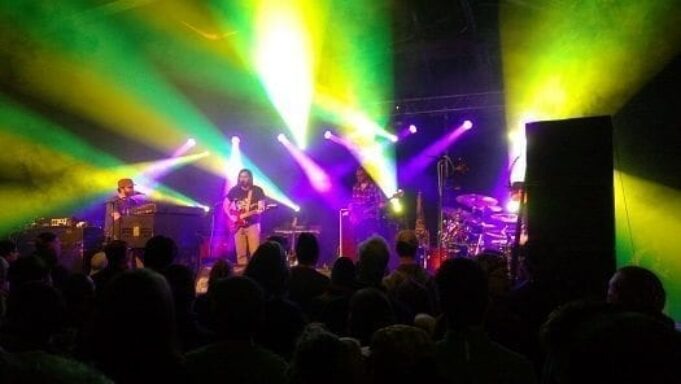 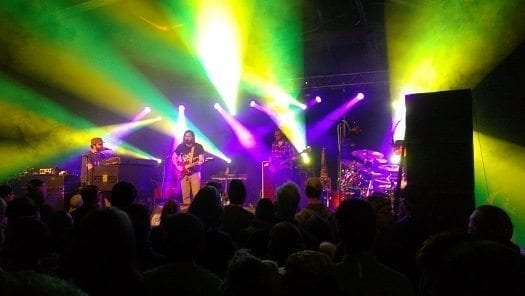 So much talent, so much pizzazz. I got to the show early at 8 pm so I could see Peridoni’s set, and it was stellar. Insanely good riffs on the guitar and the rest of the band seemed tight as hell, too. Peridoni is a mostly instrumental jam band, morphing catchy hooks and riffs together like master craftsmen. Slick performance, great tone, and tightness made the band a standout in last night’s smorgasbord of talent. One or two songs contained vocals, and I could really catch the Nature vibe from this band. This was my first time seeing Peridoni live, and I highly recommend you check them out if you get the chance. These Cincinnati brothers won’t let you down.

Sassafraz was next, and what a show did they put on. A six piece band from Columbus, they let the funk out, and reminded me of a modern day Wild Cherry. First time seeing them as well, and it was a treat. Ian Carroll shredded his custom Strat like Steve Vai on NoDoze. Jack Gould played the sax like it was the best funk band you’d ever heard. And to top it off, Thane Evans played Keys and did frontman vocals in rock star fashion, whipping the crowd into a frenzy. “Do you think you got what it takes? To live out on the road!” Thane sang with tons of passion and the band really put on a great show. The bassist was somewhat new (Goldberg left to play with the Werks), but he was just as good, if not better, than Goldberg. He did a Wootenesque bass solo complete with slaps, taps, and pops. Sassafraz played a tight set and really got the crowd warmed up for Dopapod.

Check out more photos from this night here in our gallery on Facebook.

Dopapod came out an killed it. One of the first opening songs, Keep on Growing, a Clatpon tune, got everybody happy and dancing. It was an unexpected song from a band known mostly for darker, headier jams. After a couple more Dopapod songs, in the middle of one, was Stranglehold by Ted Nugent. All instrumental, you could hear the fans screaming in delight as Compa did the vocals on his guitar with his pick in his mouth and his free hand strumming the vocal melody. The talent and taste that Dopapod has are really what keeps the fans coming back for more.

I’m a fan of the Disco Biscuits, but what Dopapod does is somewhat darker and more eerie than most jam bands tend to explore. The keyboard player has some tones that remind me of the song, Esther, by Phish. He also has some tones on other boards that are completely unique to the band, some that are all out JAM. Rob Compa plays a Gibson Hollowbody and gets a really Fat tone for his rhythm and solo work. The bass player, Chuck, is a minimallist, but he grooves right in the pocket. Combine that with a precise, clockwork drummer, and you have the Supergroup which is Dopapod. Check them out at a festival this season and see for yourself. They do well under pressure, and they pull out all the stops. They’ve paid their dues, and they’re headed for the top.

Keep On Growing
(Derek and the Dominos cover)

I Am (Whale Song)

This video is from the show the night prior.  From the video channel of Jay Lakes.

Check out more photos from this night here in our gallery on Facebook.