Celebrating Their 50th Anniversary with a New Release and Tour: the legendary prog band came to Baltimore MD at Orion Studios by Tom Evans

Nektar is back! The progressive rock band was formed in 1969 by Roye Albrighton, Derek “Mo” Moore, Taff Freeman, Ron Howden and Mick Brockett, and they are celebrating their 50th anniversary with a new release and tour, dubbed The Up Close and Intimate Tour 2020. Sadly Albrighton passed away in 2016 and Freeman no longer plays with the band, but three original members, Moore on bass and vocals, Howden on drums and vocals, and Brockett, light musician, are joined by Ryche Chlandra on guitar and vocals, Randy Dembo on bass and 12 string guitar, and Kendall Scott on keyboards. Chlandra and Dembo may be familiar to Nektar fans. Ryche was a member in ’77, and Randy joined in 2005. Rounding out the sound was the dynamic duo of MaryAnn Costello and Maureen McIntyre on backing vocals.

The band played a two night stint at Orion Studios in Baltimore MD in early January as the 4th and 5th gigs of the tour. The Orion is a rehearsal and recording complex, and the venue definitely provided an “Intimate” setting with great sound for these two nights. About 90 Nektar fans each night had the privilege of seeing this legendary Progrock band dig deep into their classic songs as well as explore new songs from the CD “The Other Side,” released on Jan 24th.

Before the show, the band chatted with fans and signed autographs as part of a meet and greet package. The band members seemed truly happy to interact with the fans and shared many stories about the early days of the band as well as the recording of the new album.

Night 1 started with a walk on to The Light Beyond, from the new album, featuring Scott on the keyboards. This gave way to a classic Nektar song, A Tab in the Ocean, which demonstrated the complexity of the material and the musicianship of the members of the band.

Next up was a medley of songs starting with Dream Nebula/It’s All In the Mind from the first album and ending with Drifting from the new album. This new song was a highlight of the evening as it showcased the guitar work of Chlandra and the keyboards of Scott. Howden navigated the odd time signature with ease and power, and Moore held down the low and with melodic flair. Dembo’s 12 string was the icing on the cake.

Love Is/The Other Side and Devil’s Door from the new CD were up next. Brockett’s video montage during the Other Side featured images of people who are now on the other side, including Albrighton. It was a touching moment as lights and images served to elevate and illustrate the music.

Devil’s Door was written in the 70’s by the original band and updated by the new line up. It is another strong song from the new album and features the guitar of Albrighton on the intro taken from a concert recording from the 70’s. Brockett projected concert footage of Albrighton during this intro. The rest of the set featured fan favorites from the classic era: Remember The Future part 2, Remember The Future part 3, Crying in the Dark and King of Twilight (from A Tab In The Ocean), and closing out the set with Recycled, featuring the bass guitar tag team of Moore on double neck bass and Dembo on Rickenbacker and Taurus pedals. Throughout the set, the band was locked in and presented both the classic material and the new songs with equal enthusiasm. You could see they were really enjoying themselves, as was the audience. Night 1 closed with the encore of I’m On Fire from the new album, featuring the heavy keys of Scott (including some John Lord influence) and vocals by Moore. The lyrics for this rocking number were penned by Moore as a love letter to his girlfriend, now wife, and it was a great song to finish up night 1.

After the set, the band came out and again spent time chatting with the crowd to the delight of everyone in attendance. They set the bar very high and it was going to be a challenge to top this night.

In an interview in the 70’s when Nektar first toured the U.S. Moore explained, “We wanted to do a three hour show, and we didn’t want a supporting group ‘cause we wanted to create our own atmosphere from the beginning to the end of the concert. We want to make the concert a happening where everybody feels that they are a part of it. We got a lot of music to choose from. Every concert will be different.” This still holds true for this tour!

Night two did feature a different set list and the band appeared rested, relaxed, and ready to play another great show. Love Is/The Other Side started off the show, again featuring the visuals of Brockett. Remember The Future part 2 came next, followed by Skywriter from the new album, another song that had it roots in sessions from the 70’s and updated to its current form.

Desolation Valley/Waves came next, and they nailed it after working on it during sound check. Howden took the lead vocal here, proving he is one of the great singing drummers. The trio of Dream Nebula/It’s All in the Mind/Drifting was up next, and Drifting again impressed the crowd with the solos of Chlandra and Scott. Remember the Future part 1 was featured on Night 2, followed by Part 3 (rarely has the band played this album start to finish, but they did play the whole thing over the two nights, as they did with A Tab In The Ocean). The set again closed with Recycled, featuring some of Howden’s best drumming and featuring his vintage Rogers tympani.

The encore for Night 2 started with Look Through Me from The Other Side, featuring Chlandra’s acoustic guitar and vocals and was followed by I’m On Fire. Once again the band mingled with the fans after the show and signed autographs for all who asked.

These two nights were a sonic and visual treat, paying homage to the band’s legacy by presenting long and varied sets and an innovative light show and paving the way for the future. The new songs fit together nicely with the older songs, and the band is firing on all cylinders. This is the real Nektar, and they are on fire!

Setlist Night 1
(from band’s actual set lists, so some of the listed song titles are different)
The Light Beyond
Tab In The Ocean
Dream Nebula/Roundabout/Drifting
Love Is/The Other Side
Devil’s Door
Remember The Future 2
Remember The Future 3 (Let It Grow)
DJAM/King of Twilight
Recycled

Encores
Look Through Me
I’m On Fire
Good Day

Drop us a line at lmnandr@gmail.com with your show review or live music news story. 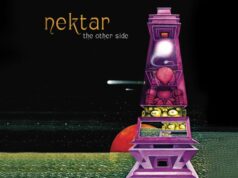 Live Music News & Review was born out of a love of live music and the wish to chronicle the amazing shows happening around the country. Stories and reviews are born both from our editorial board and from readers just like you around the country.
Contact us: lmnandr@gmail.com
5,401FansLike
201FollowersFollow
302FollowersFollow
6SubscribersSubscribe